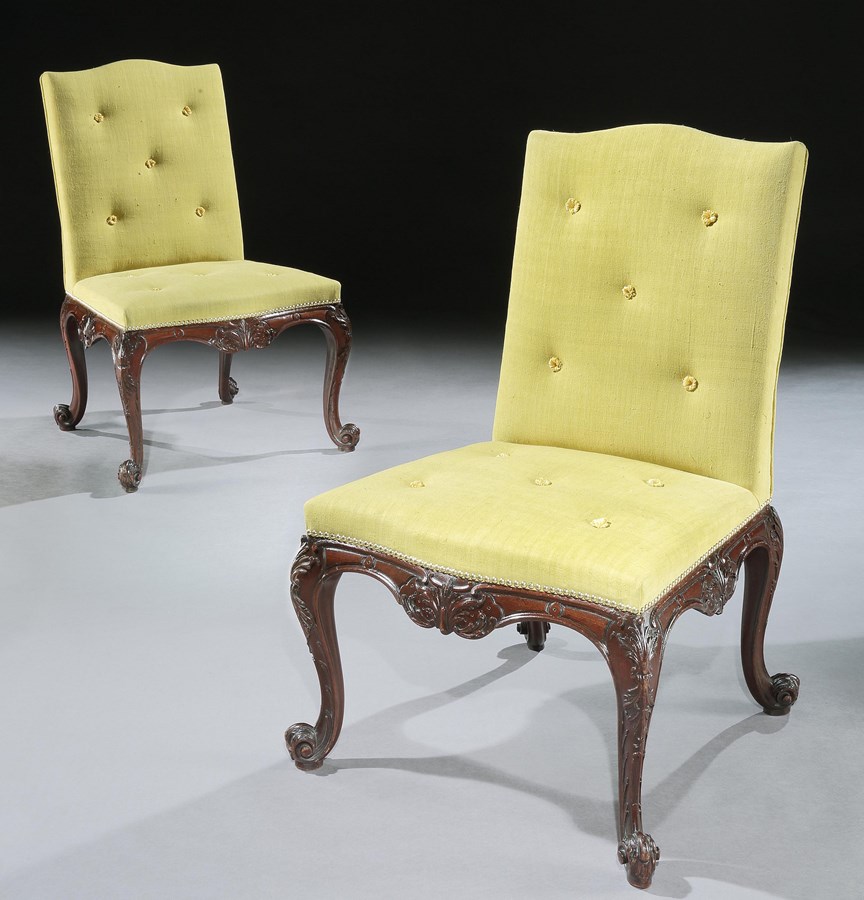 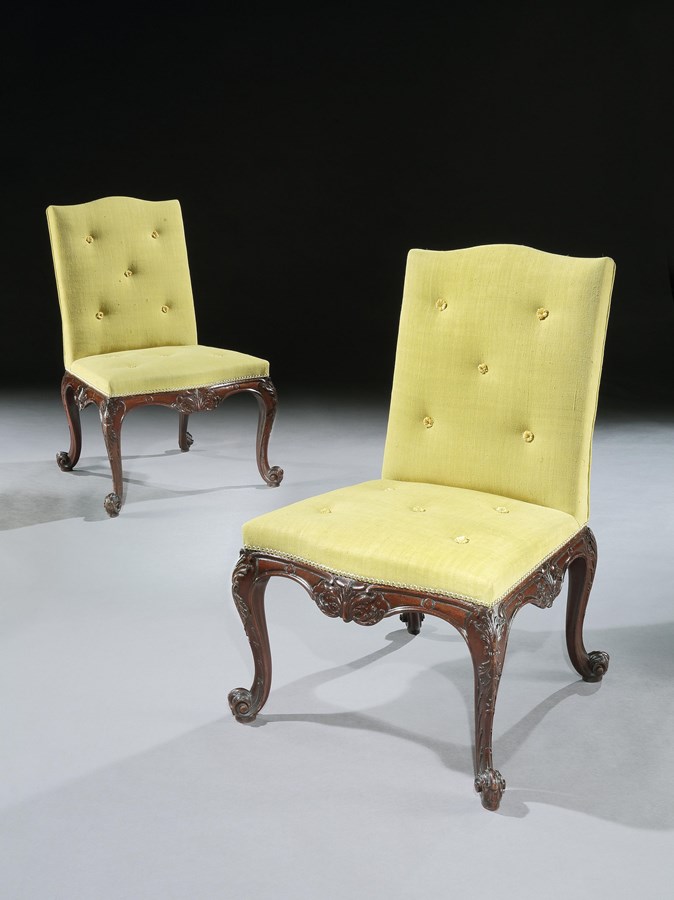 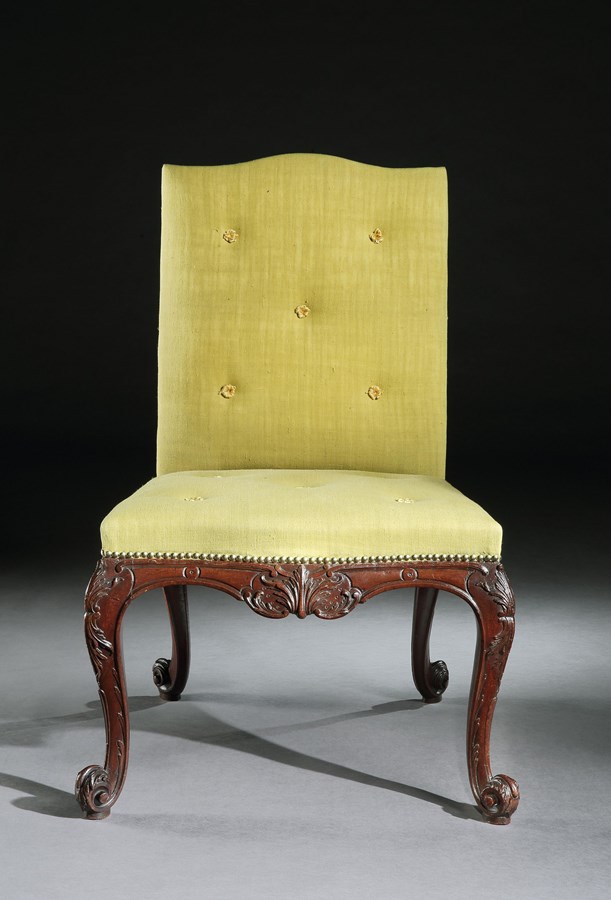 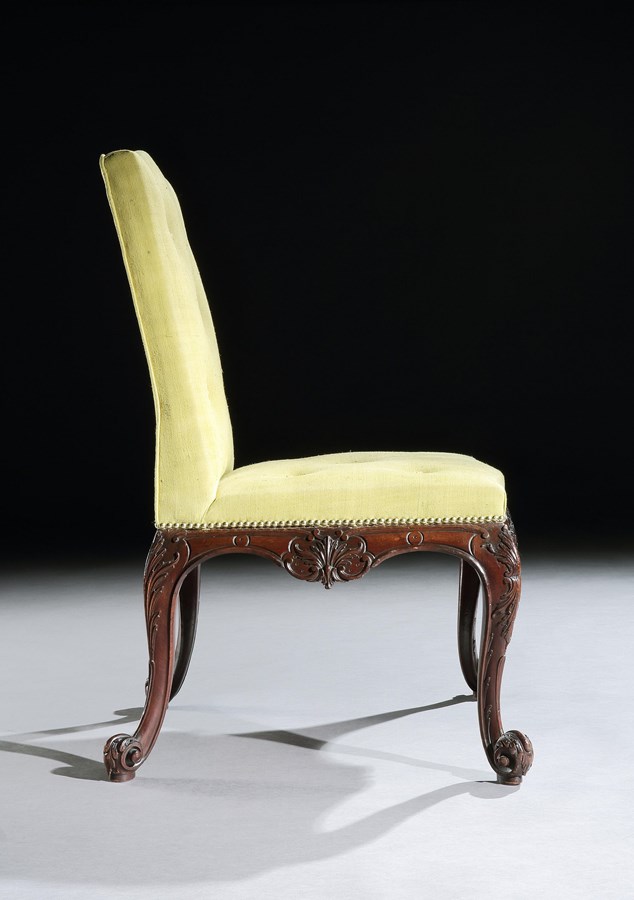 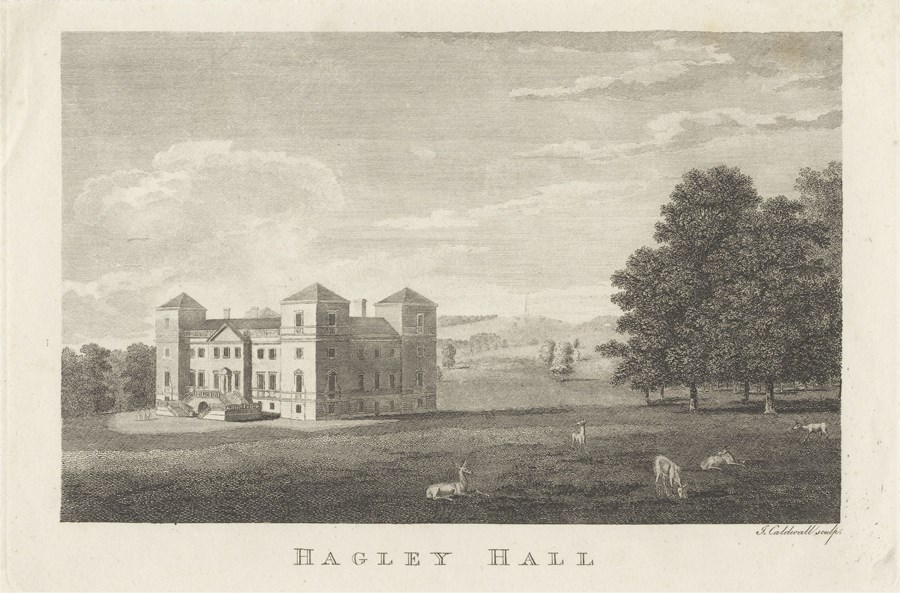 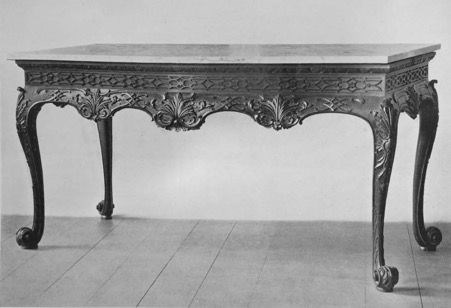 The carving of exceptional quality and crispness.

Photographed in situ in the Saloon at Hagley Hall, Worcestershire.

William Vile & John Cobb
These magnificent side chairs, from Hagley Hall, can be attributed to the celebrated partnership of William Vile (1700-1767) and John Cobb (1710-1788).

William Vile worked with John Cobb from 1750 until 1765 in Covent Garden at No. 72, the corner house of St. Martin’s Lane and Long Acre. Vile and Cobb held the Royal Warrant from 1761 to 1764, and their work can be seen in the Royal Collection at Buckingham Palace. In addition to their royal clients, the partners also received important commissions from the 1st Earl of Leicester at Holkham Hall, the 4th Duke of Devonshire at Chatsworth, and the 4th Duke of Bedford at Woburn Abbey.

John Cobb particularly favoured the elegant French taste and this influence can be clearly seen in his work.

The attribution of these chairs is based upon close similarities to a documented suite that Vile & Cobb supplied to John Damer for Came House, Dorset.

The accounts of Came House feature the following entry on 13 July 1761:
For 10 good mahogy. Back stool chairs with carv’d feet, stuft and covered with damask and finished compleat with Burnish Nails £23

The account continues to list a ‘French armchair’ and a ‘good mahogy. sopha’ both of which are illustrated along with a matching writing-table in A. Oswald, ‘Came House, Dorset-II’, Country Life, 27 February 1954, p. 573, figs. 7-9. The frames of this suite of seat furniture and the writing table display a similarly conceived apron with the channeled decoration and the elegant cabriole leg with acanthus to the knee and scrolled foot.

The attribution can be further supported on the basis of a mahogany cupboard attributed to William Vile that displays a very similarly carved apron and is illustrated in R. Edwards, ‘Attributions to William Vile’, Country Life, 7 October 1954, fig. 4.

Upon returning to England, Lyttleton was elected to the House of Commons in 1735 and subsequently served as secretary to Frederick, Prince of Wales. He later served in the role of Chancellor of the Exchequer.

Lyttelton was a great patron to poets, including Alexander Pope and Henry Fielding—the latter dedicated his novel Tom Jones to Lyttelton. In addition to literature, Lyttelton was a keen antiquarian and served as a Fellow of the Royal Society and the Society of Antiquaries.

Lyttelton was a frequent guest at Stowe as his mother, Christian, was daughter of Sir Richard Temple, 3rd Baronet, whose family owned the estate. Lyttelton was undoubtedly inspired by the house and gardens, which were at the height of fashion. Lyttelton is celebrated as one of the ten marble busts in the Temple of Friendship in the gardens of Stowe.

Lyttelton married Lucy, daughter of Hugh Fortescue in 1742, but when he was widowed in 1747, he married Elizabeth, daughter of Sir Robert Rich, 4th Baronet. Elizabeth was a good friend of Horace Walpole and had a significant impact on the design and decoration of Hagley.

Hagley Hall
Hagley Hall is the family home of the Lyttelton family. George Lyttelton set his sights on renovating and replacing the existing building on the grounds of the estate with the present magnificent neo-Palladian mansion between 1754 and 1760. He commissioned the architects Sanderson Miller (1716-1780) and John Sanderson (d. 1774) to design and construct the house, which features corner towers with pyramidal roofs and Venetian windows.

By 1756, the grand classical façade was complete, and the poet William Shenstone commented on his impressions of the new house in a letter saying, ‘The house at Hagley is, in a manner, finished… and wants nothing besides a portico to be as compleat as most in England.’

Horace Walpole had similar praise for the house and grounds when he visited, noting that ‘I wore out my eyes with gazing, my feet with climbing, and my tongue and vocabulary with commending.’

The Interiors
The designs for the interior of the house can be attributed to the local architect Sanderson Miller and John Sanderson, an architect from London. The latter created similar designs for the dining room at Kirtlington Park, Oxfordshire (now installed in the Metropolitan Museum of Art, New York). The rooms are resplendent with Rococo plasterwork by Francesco Vassali. His signature survives on the corner of a bas-relief over a chimneypiece.

The Grand Tour and the art of ancient Greece and Rome greatly inspired Lyttelton’s decoration of the Hagley interiors. The White Hall features scagliola figures in the niches of Bacchus, Mercury, Venus, and the Dancing Faun, which are copies of those at the Pitti Palace in Florence. Lyttelton also brought back two marble busts of Roman emperors from his travels that are on display in the same room.

This pair of chairs, en suite with the exceptional pair of carved mahogany tables (one of which is pictured below), would have been supplied to furnish the Saloon and appear in an early Country Life interior photograph of 1915.

The room features a Rococo ceiling of cherubs in clouds with garlands and trophies decorating the walls. These trophies reflect Lyttelton’s wide ranging interests in literature and the arts. The plasterwork is complemented by a Sienna marble chimneypiece.

The windows of the room look out on to the grand park that Lyttelton designed with leading garden designers of the day, including Lancelot ‘Capability’ Brown.

The pair of tables, one also shown in the Country Life photograph, were sold Christie’s London, 14 June 2001, lot 50. 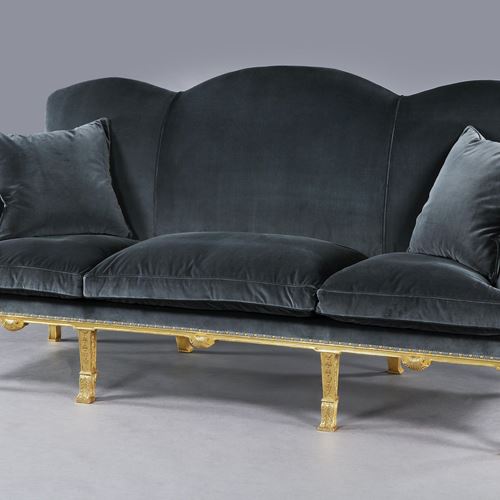 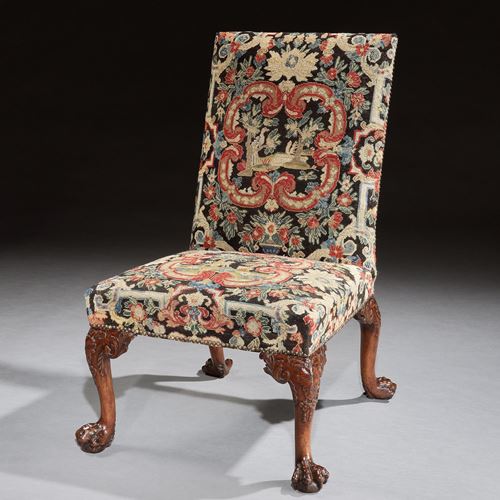 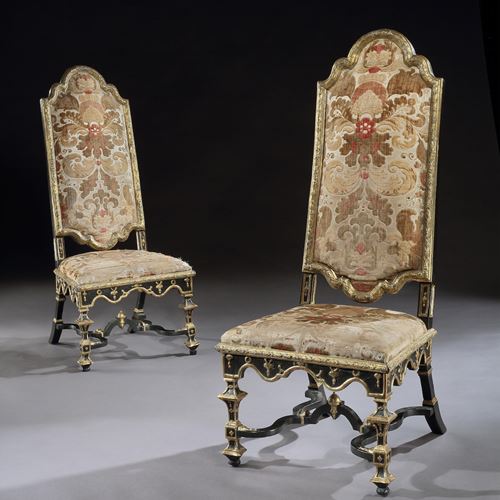