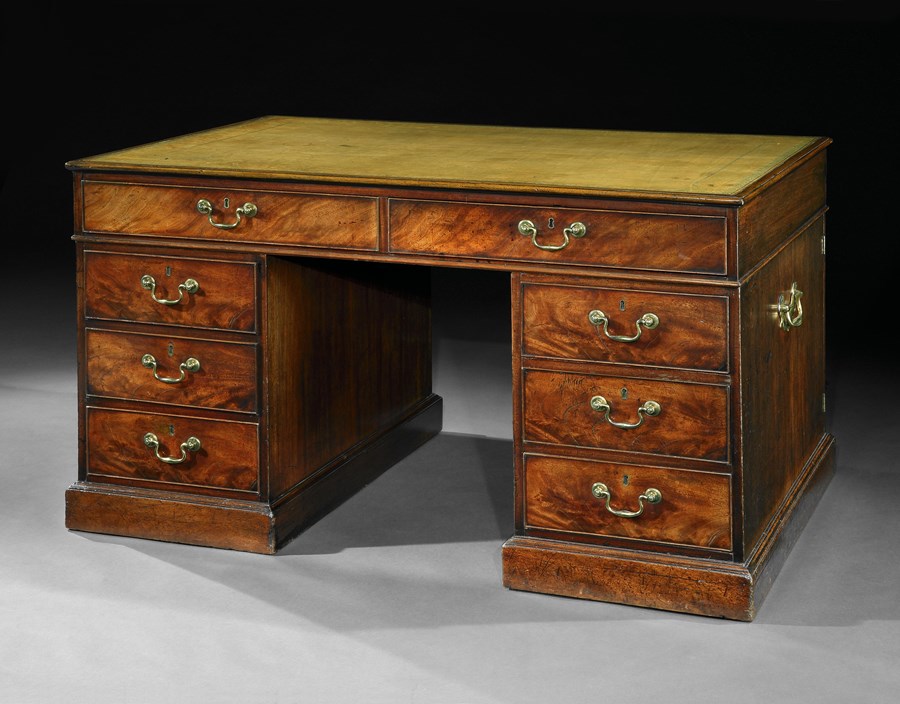 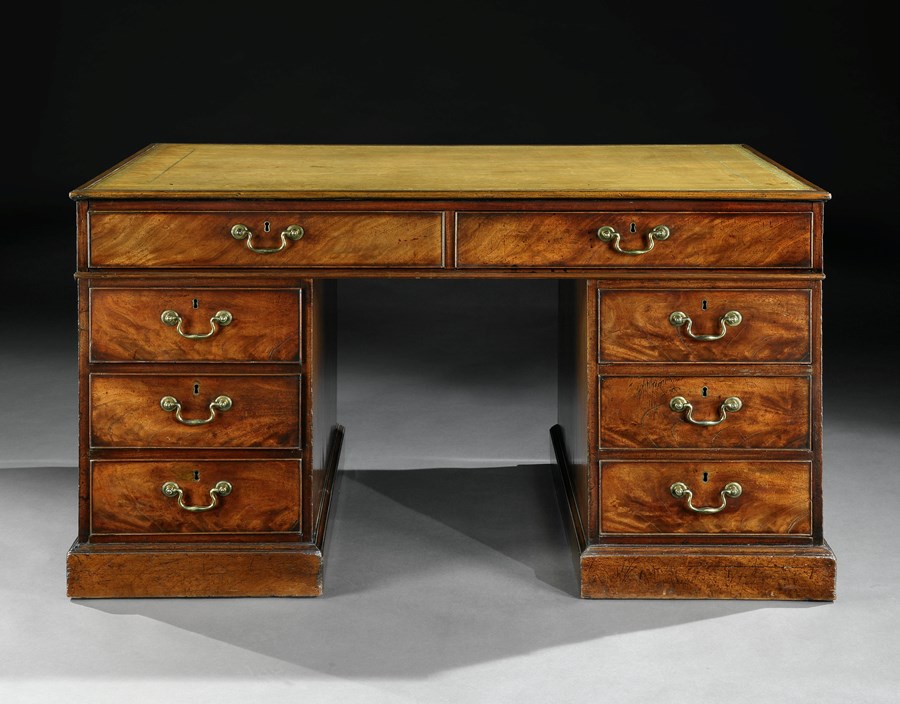 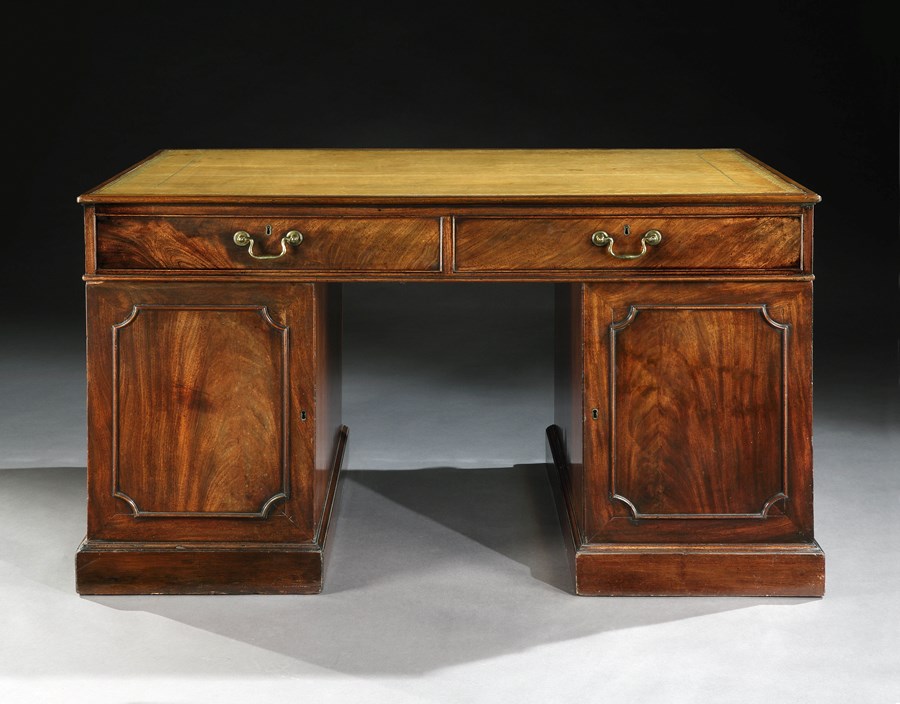 A very fine George III Chippendale period mahogany pedestal desk, the cross-banded fitted with a fine gilt tooled leather top, above a frieze with two drawers and dummy drawers on the reverse, the pedestals fitted with drawers on one side and cupboard doors on the other, raised on a  moulded plinth support.

Retaining it original swan neck handles to the drawers, and bold carrying handles to each side. Of superb colour and great proportions.

Notable is the rare drawer configuration of two wide drawers along the top (instead of the usual three). None of the major 18th century design books feature desks with this configuration – they all feature 3 long drawers on the top.
The recent “re-discovery” of an article published in Country Life by John Cornforth on 5th October 1978 is intriguing in this regard. The article focuses on a group of furniture made for Tythegston Court in Glamorgan and features a very fine pedestal desk made for the house which also features the two over three drawer configuration. The receipt for the desk survives, as does the original design drawing – dated 1770 – and it was made by Ludgate Hill (London) firm of Say and Kay. Say and Kay are largely unstudied today but were a major force in the London trade in the 18th century. Francis Say, one of the partners, was an original subscriber to Chippendale’s Director. As late as 1803, Thomas Sheraton included the firm in his list of master cabinet-makers is his Cabinet Dictionary and, given how fashionable an area Ludgate Hill was at this time (the Royal jewellers Rundell, Bridge and Rundell were here as was the Royal chandelier maker John Blades), it is clear that the firm would have had some very important clients. In the Dictionary of English Furniture Makers 1660 – 1840 the firm is described as “one of the largest London upholders”. Other known work by the firm includes commissions for Petworth House in 1807 and Longford Castle in 1780-81 and 1790. No details relating to this work survives but accounts relating to a cylinder desk supplied to Sir Thomas Baring for the Manor House in Lewisham in 1798 have been preserved. Although an attribution on the grounds of this evidence can only be tentative at this stage, it is hoped that further research into Say and Kay and their clients and commissions will be undertaken by scholars at some stage. The quality of the desk is quite evident. 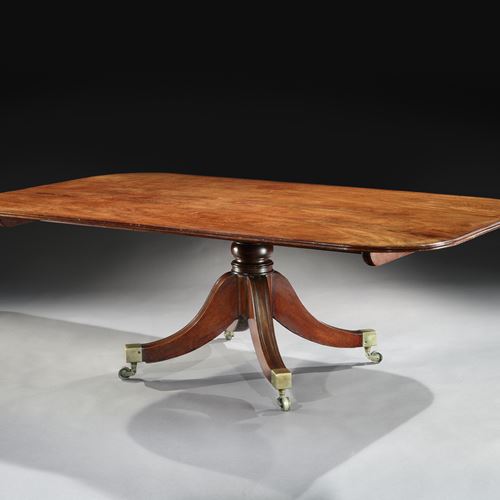 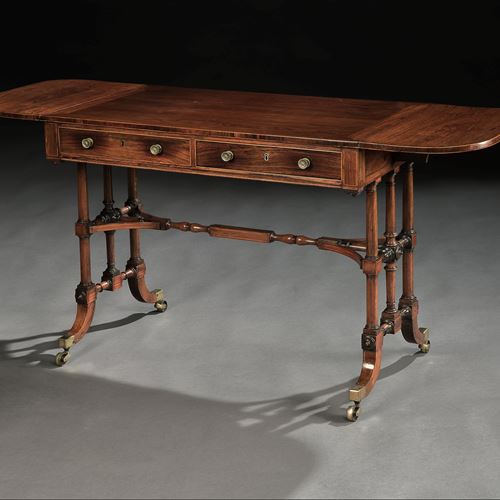 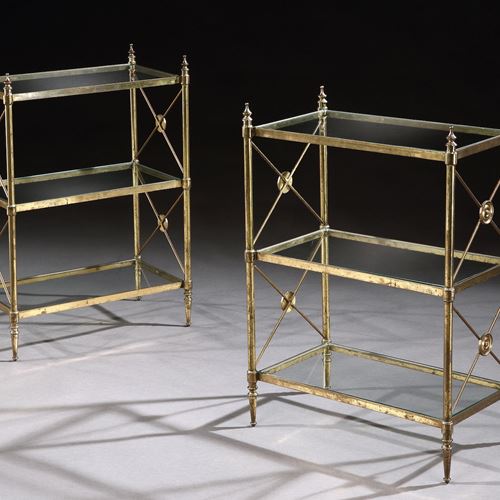 JANSEN: A PAIR OF BRONZE ETAGERES