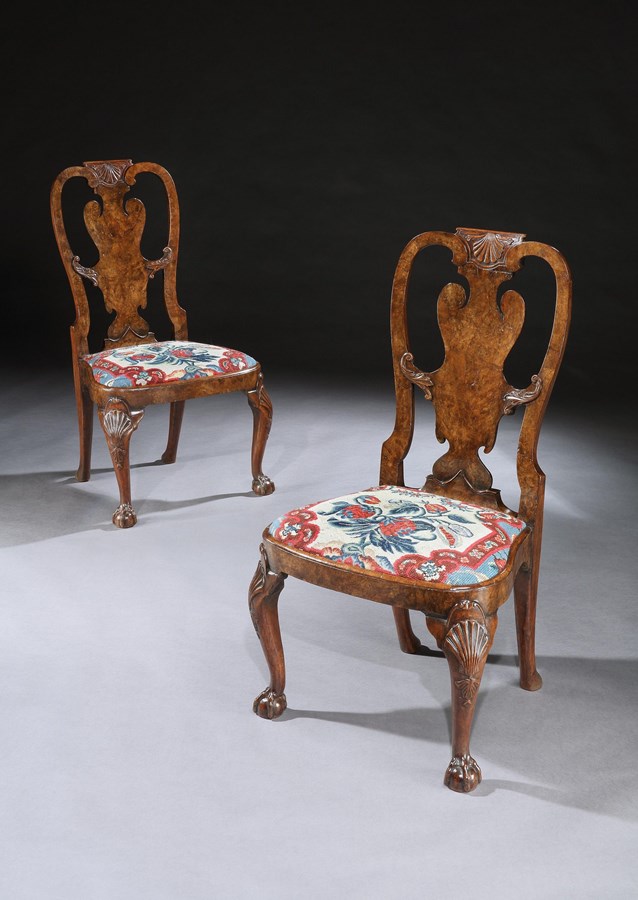 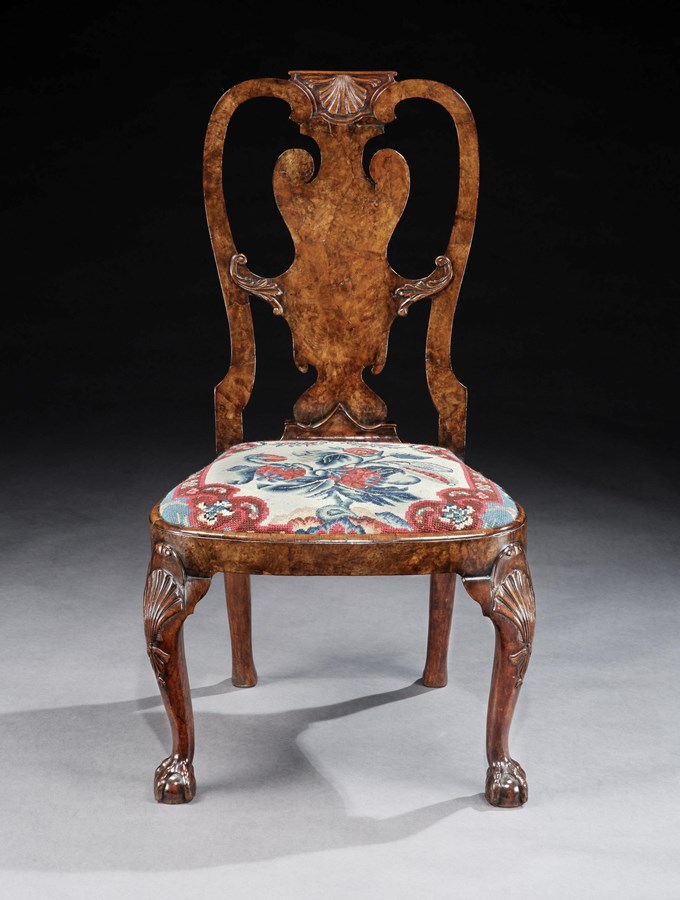 A very fine pair of George II burr walnut side chairs in the manner of Giles Grendey. The curved backsplats with burr walnut veneers of rich colour, carved with scrolls and acanthus leaves and flanked by shaped side rails, the top centred by a shell carved cresting, the compass drop-in seats covered in period gros and petit point needlework, raised on boldly carved cabriole front legs with a carved shell at each knee and ending in claw and ball feet, the back legs of curved and tapering form. Of outstanding colour and patina.

Giles Grendey
Giles Grendey (1693 – 1780) was a leading London cabinet maker, born in Wooton-under-Edge in Gloucestershire, and was apprenticed to the London joiner William Sherborne, becoming a freeman in 1716. Taking his own apprentices by 1726, Grendey was elected to the Livery of the Joiners’ Company in 1729. His first workshop was at St. Paul’s, Covent Garden, moving to St. John’s Square, Clerkenwell in 1772 where he developed a thriving export trade. His labels advertised that he ‘makes and sells all sorts of cabinet goods, chairs, and glasses.’

It was reported in various newspapers on August 7, 1731, including the Daily Post and Daily Advertiser, that a fire which started on adjacent premises to Mr Grendey ‘a Cabinet-maker and Chair-maker’ caused him to lose furniture to the value of £1,000, which he ‘had packed for Exportation against the next morning’.

Throughout his career, Grendey provided furniture for Sir Jacob de Bouverie at Longford Castle, Lord Scarsdale at Kedleston Hall, and Henry Hoare at Stourhead.  His most famous recorded commission came from the Duke of Infantado, Lazcano, northern Spain, who acquired from Grendey a suite of some seventy pieces of scarlet japanned furniture, which included cabinets, tables, torcheres, mirrors and chairs.

Grendey’s daughter Sukey married John Cobb, a cabinet maker who partnered with William Vile and also served as a cabinet-maker for George III.

Chair Design
Grendey specialised in walnut and mahogany furniture for the English market and a number of his pieces survive today in both public and private collections.

These chairs relate very closely to a known design by Grendey that retain his label, sold at Sotheby’s New York on 21 November 1981 (lots 233-235). There are other directly related examples, including a single chair at Temple Newsam, a chair from the collection of the Duchess of Wellington, and an example at the Carnegie Museum of Art, which also retains its original Grendey label. Each of these chairs feature the same basic silhouette with variation to the carved features, including the presence of C-scroll brackets on the knees of some and carved flower heads of the rising scrolls of the vase-shaped splats.