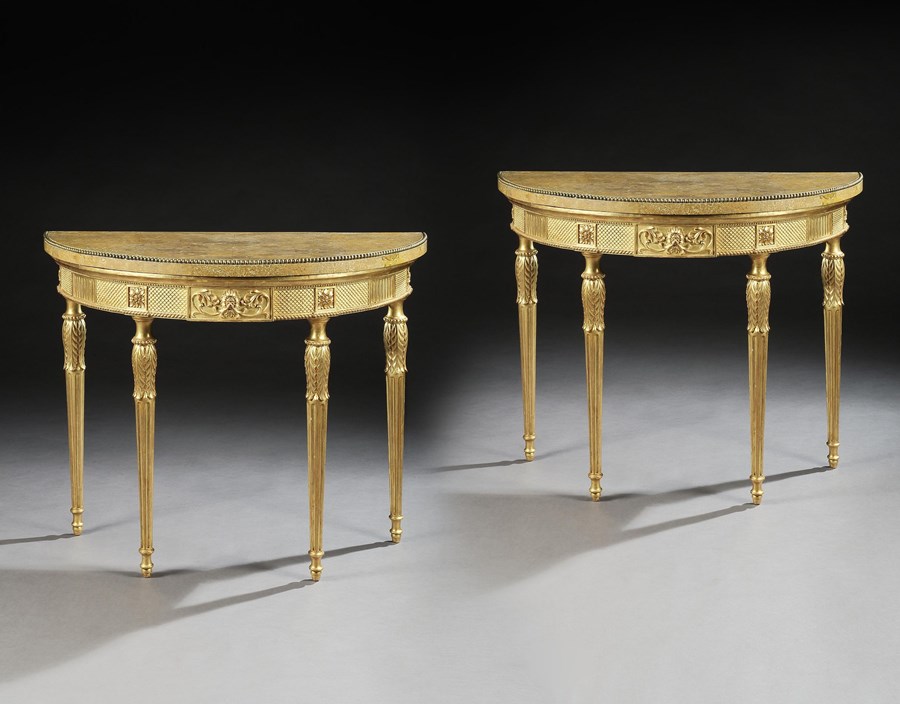 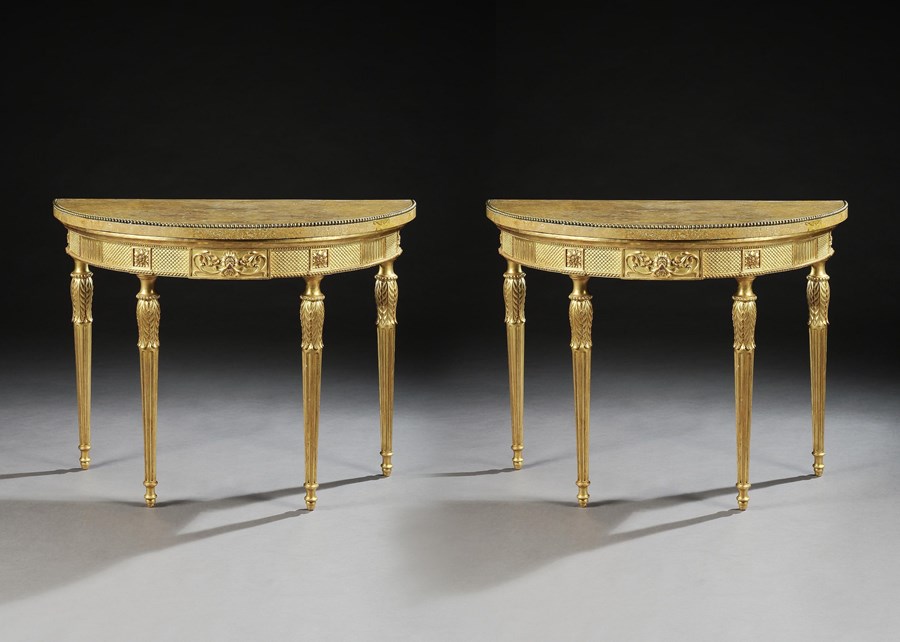 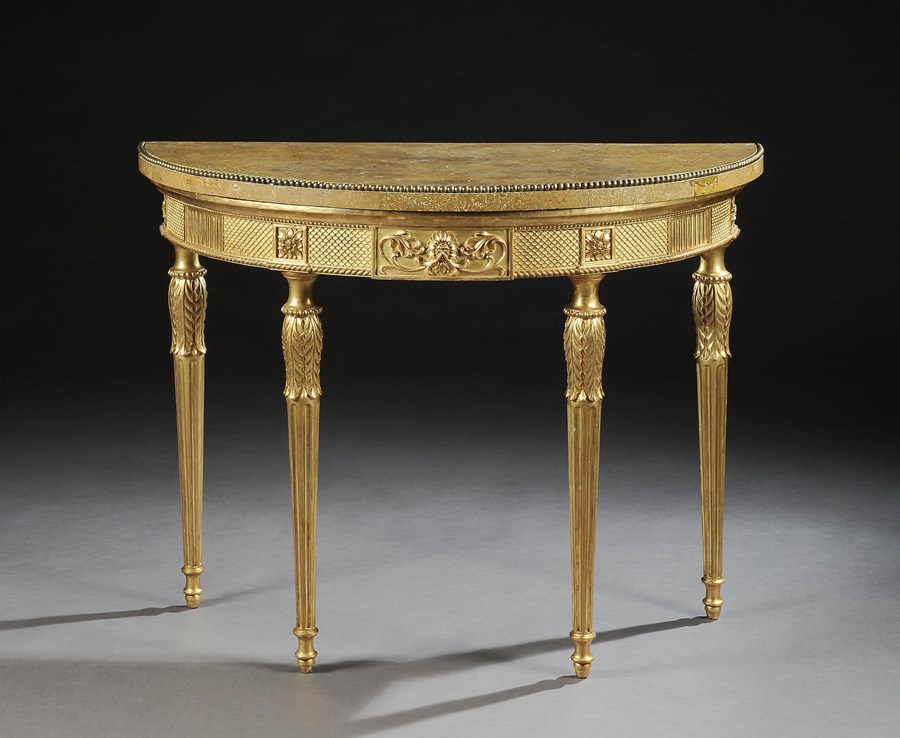 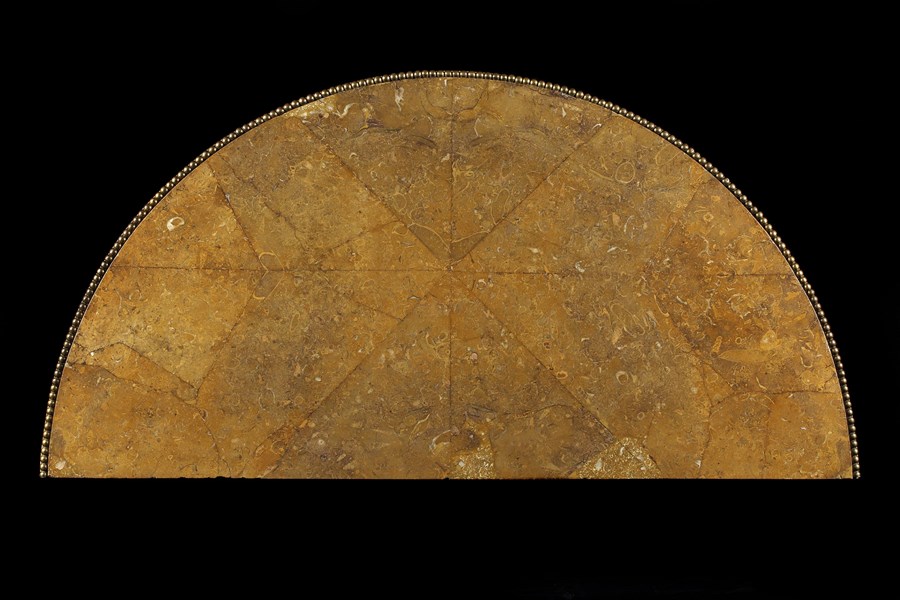 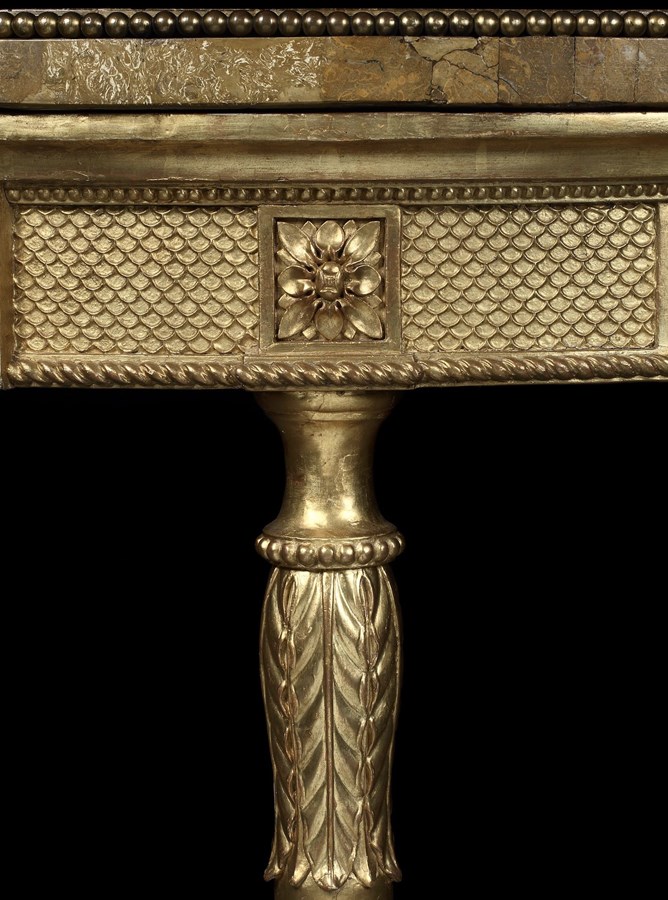 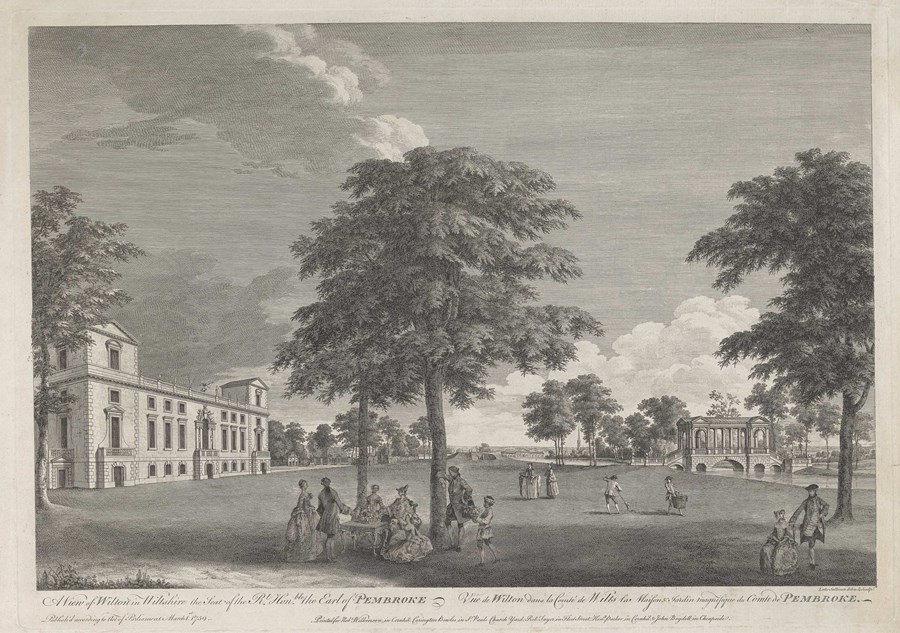 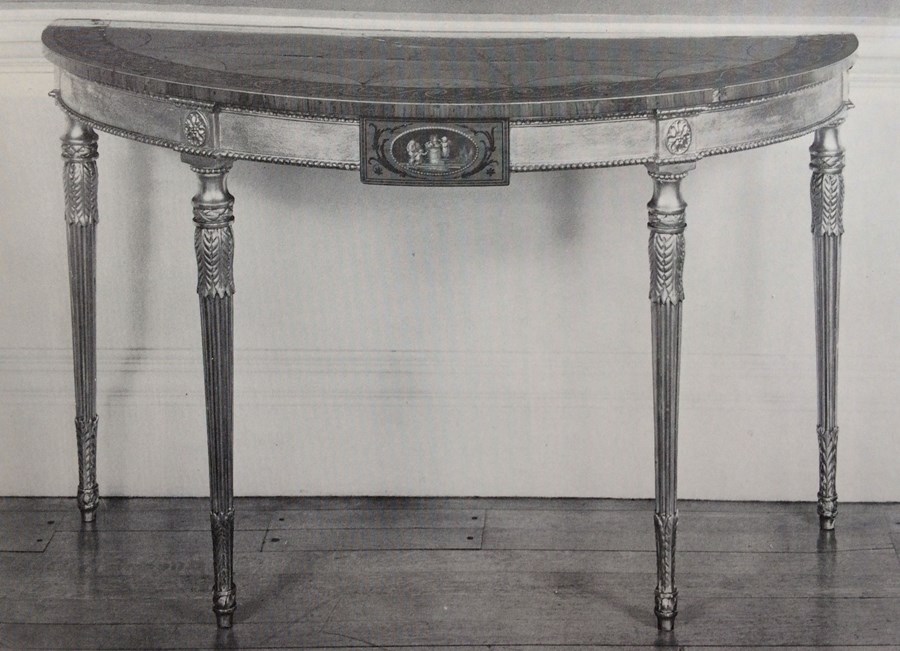 An outstanding pair of George III giltwood demi-lune pier tables in the neo-classical taste attributed to Thomas Chippendale. Each with magnificent fossilized marble tops with an ormolu beaded edge above a conforming frieze centred by a rectangular tablet carved with a flower-head flanked by honeysuckle, the frieze with a fish-scaled ground alternating with flower heads and fluted panels, raised on acanthus-carved circular tapering fluted legs on toupee feet.

Wilton
Wilton has been the country seat of the Earls of Pembroke for nearly 500 years. King Henry VIII presented Wilton Abbey and its estate to William Herbert, 1st Earl of Pembroke (1501-1570) in about 1544. Some believe that the 1st Earl brought in Hans Holbein the Younger (1497-1543) to re-design the abbey as a rectangular house around a central courtyard. This design forms the core of the present structure. The great tower in the centre of east façade with its central arch and three floors of oriel windows above recalls the entrance at Hampton Court.

In the 1630s, the 4th Earl of Pembroke commissioned Inigo Jones (1573-1652) to build a new series of State Rooms in the Palladian style. Jones was close with the Herbert family and it is thought that the 3rd Earl may have paid for Jones’ trip through Italy to study Palladio and classical architecture. These seven state rooms are some of the finest that survive today in English country houses. One of the rooms is the Double Cube Room, which measures sixty feet long, thirty feet wide, and thirty feet high. The room features panelled walls painted white and decorated with gilded swags of foliage and fruit and is filled with magnificent furnishing by William Kent and Thomas Chippendale and outstanding portraits by van Dyck.

The 10th Earl of Pembroke
Henry, 10th Earl of Pembroke (1734-1794), succeeded his father in 1749. He was a celebrated military man who fought in Germany during the Seven Years War and achieved the rank of Major-General in 1761. He wrote the British Army’s manual on riding, Military Equitation: or a Method of Breaking Horses, and Teaching Soldiers to Ride. He also served as Lord of the Bedchamber to George III.

Lord Pembroke took great interest in both the architecture and gardens of Wilton, and he commissioned William Chambers (1723-1796) to complete ‘Various designs for fitting up rooms’ at both Wilton and his London residence, Pembroke House. Lord Pembroke also consulted Lancelot ‘Capability’ Brown (1716-1783) in 1779 regarding the gardens at Wilton.

Thomas Chippendale
In the introductory notes of the Director, Thomas Chippendale (1718-1779) mentions only three patrons by name: the Earl of Dumfries, the Earl of Morton, and Henry, 10th Earl of Pembroke. He notes of Plate XLVI, ‘N.B. This Couch was made for an Alcove in Lord Pembroke’s House, at Whitehall.’ In total, Lord Pembroke spent £1,500 11s. with Chippendale between the years 1763 and 1773. A number of magnificent pieces, including the celebrated ‘Violin’ bookcase, remain at Wilton to this day.

Chippendale incorporated neo-classical motifs for the first time in the 3rd edition of his Director (1762). Although, unlike many of his peers, Chippendale did not embark on a Grand Tour himself, he would have been familiar with the recent discoveries at Palmyra as recorded in Robert Wood and James Dawkin’s 1753 publication Ruins of Palmyra and might well have seen some of the actual ruins brought back from Palmyra and put on display at Vauxhall Gardens in London in 1754. It was during this period that Chippendale is known to have worked closely with Robert Adam supplying furnishing to some of the most celebrated neo-classical interiors of the period.

The legs of the present tables are nearly identical in form to those on a demi-lune pier table attributed to Thomas Chippendale that was supplied to Sir Richard Worsley for the drawing room at Appuldurcombe in the late 1770s. These are recorded in the inventory as ‘2 circular slab frames car’d & gilt in burnish’d gold with tops neatly inlaid, diff’t colour’d woods.’ Both pairs of tables feature neo-classical motifs, including the tapered fluted legs with stylised acanthus leaves and the central paterae at the tops of the legs.

For many years, these tables have been documented as from Wilton House 'by repute'. We are now delighted to confirm that this has now been verified. The tables were offered for sale in 25 May 1960 as lot 367 in the Rawlence & Squarey auction: Catalogue of Surplus Furnishings of Wilton House Salisbury - the property of the Earl and Countess of Pembroke and Montgomery. The tables were miscatalogued as French Empire, but every other aspect of the description and dimensions tie in completely accurately: "A pair of French Empire half-circular gilt console tables, on four fluted quiver legs with foliated caps, the guesso frieze of scale design, centering in the anthemion motif, surmounted with (porphyry) marble tops, 3ft 9 in wide".