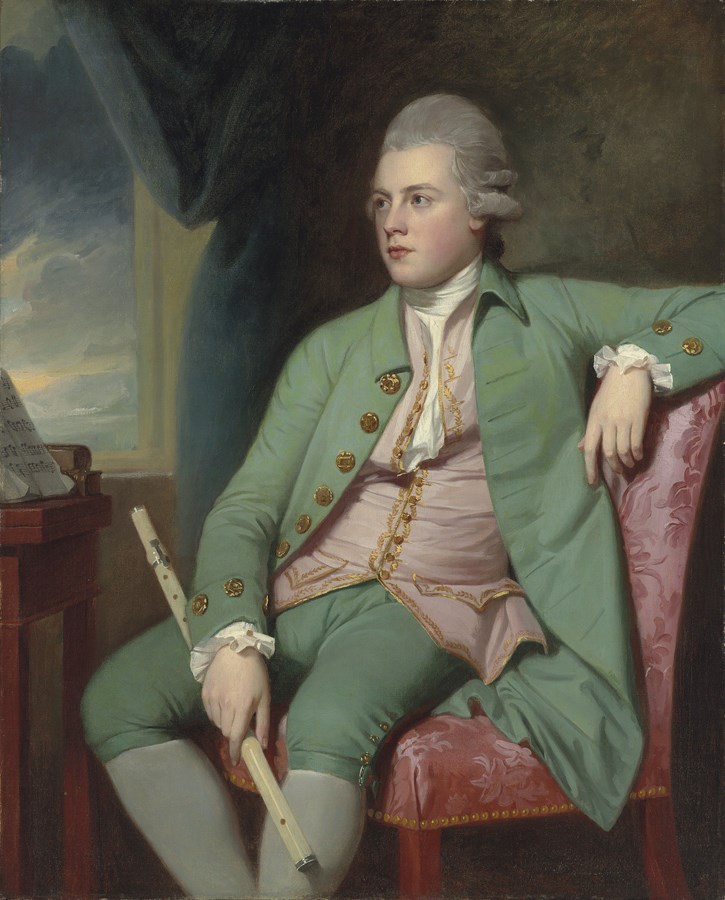 A portrait by George Romney of Francis Lind, three-quarter-length, seated at a window, holding a one-keyed Simpson ivory flue in his right hand.

Oil on canvas, in a contemporary Maratta frame.

Painted for the sitter’s mother, Elizabeth Lind, née Farrer, along with the portrait of Edward Lind and both paintings passed by inheritance to the sitter’s niece,
Elizabeth Lind, wife of George Denys, and by descent to their daughter,
Juliana Louisa Denys, wife of Arthur Montagu, and by descent to their son,
Leopold Agar Denys Montague (1861-1940), and by descent until,
Anonymous sale; Sotheby’s, London, 13 June 1994, lot 54 (Edward’s portrait was lot 55)
Anonymous sale; Christie’s, London, 26 November 2003, lot 6, when acquired by the present owner.

The sitter of this portrait, Francis Lind, was the son of Captain Francis Lind, M.D., of the 14th Regiment of Foot and his wife Elizabeth, who was the daughter of Major Montague Farrer. The Lind family derived its wealth from the drapery business. The family seat was Gorgie near Edinburgh. Born on February 13, 1753, Lind served in the Indian Civil Service. He married his cousin, Ann Cooper, on October 12, 1785.

The portrait is dated to 1775-76 and was commissioned by Lind’s mother along with one of his younger brother, Edward George Lind. Alex Kidson, author of George Romney: A Complete Catalogue of His Paintings suggests that the views behind both sitters likely depicts a view of the Lake District. Interestingly, the family retained the ivory flute through the early twentieth century, according to the Catalogue Raisonné written by Humphry Ward and W. Roberts in 1904.

Edward lived with his wife, Elizabeth, at Barton in Westmorland, and she sat for Romney in 1787-88.

On the fly-leaf to Romney’s diary in 1776 there is a memorandum that reads, ‘Mrs Lind, Carlisle, to be sent on Friday morning to the Castle Inn.’ This note presumably denotes the address to which the portraits of the two Lind brothers were to be sent.

The use of the prominent green coat and trousers is an interesting choice. Michel Rastoureau, author of Green: The History of Color, notes, ‘In eighteenth-century dress, green was not a very common color. Nevertheless, it was more common in England, Germany, and northern Europe than in France and Italy. And the more green was promoted toward the end of the century, the larger its place would grow.