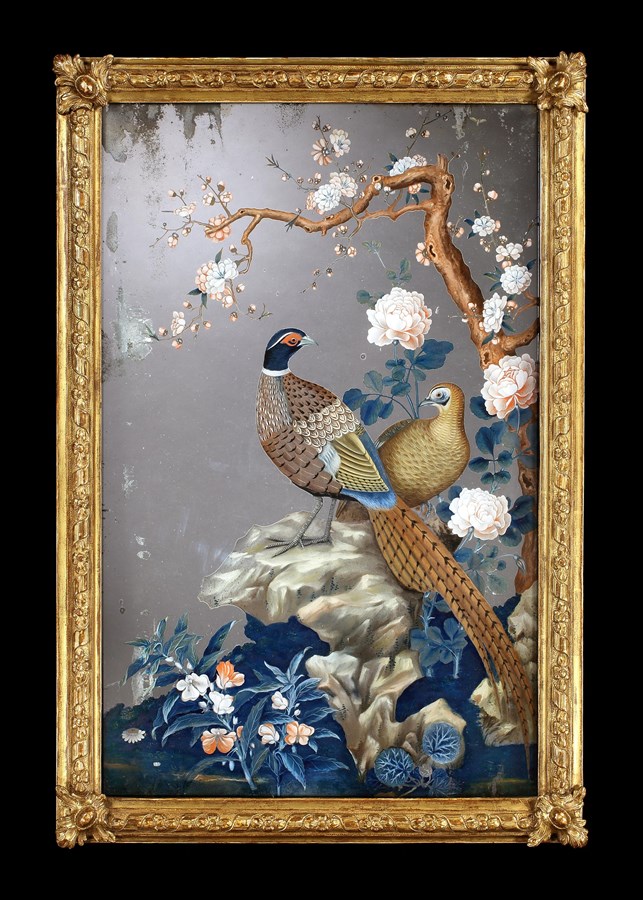 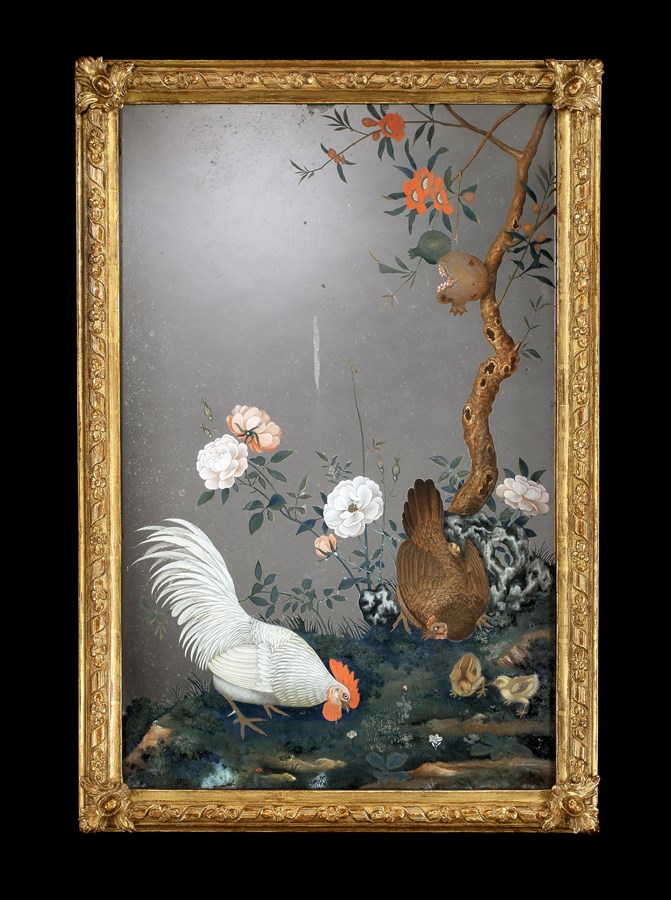 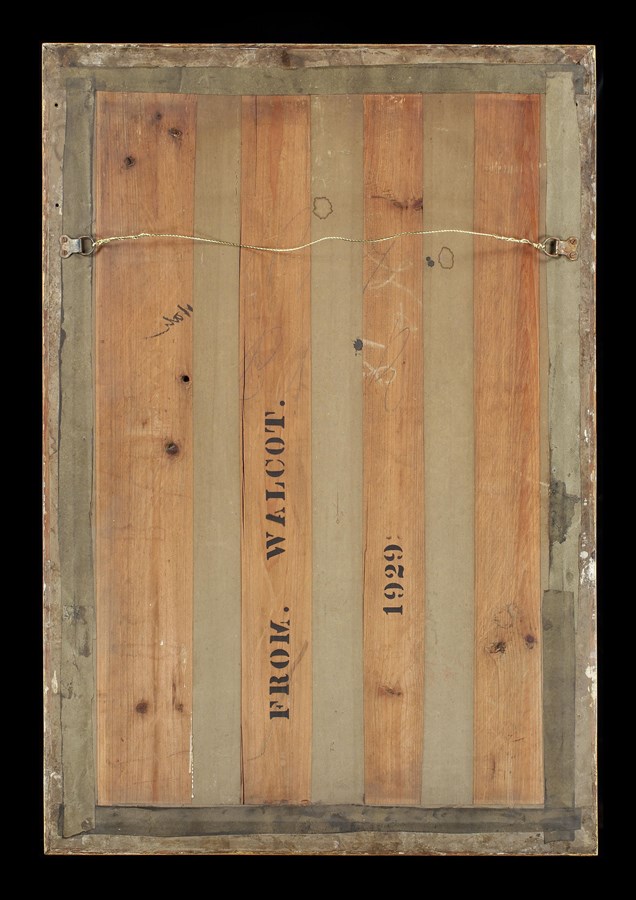 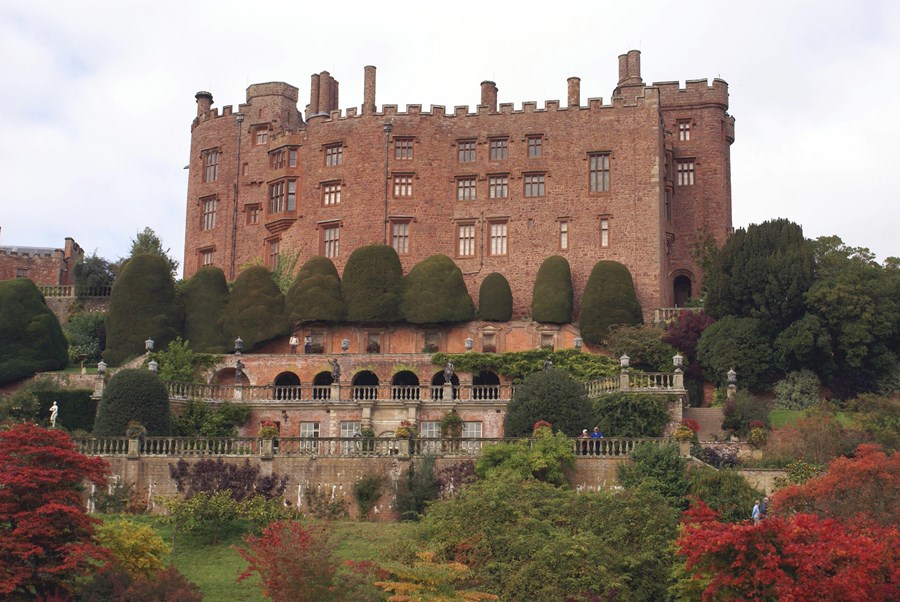 Two outstanding mid 18th century Chinese reverse glass paintings, once belonging to Clive of India. Each one beautifully painted in the finest detail, one featuring a spectacular pair of pheasants in a rocky landscape under a flowering prunus trees, the other a pair of chickens, a glorious white cockerel and a brown hen, together with their chicks, under a pomegranate plant next to roses . The glass plates mounted in their original hand carved giltwood frames. The backboard of one frame stenciled ‘From Walcot 1929’.


Robert Clive, 1st Baron Clive (1725-1774), famously known as Clive of India, is forever associated with British rule in India. Clive began his career as a writer for the East India Company. He travelled on the East Indiaman Winchester to India on an eventful voyage that took fourteen months in total. During three subsequent campaigns in India he led numerous successful battles that established British control. India soon became the “jewel in the crown” of the British Empire.

When Clive returned to England he set his sights on acquiring property both in town and in the country and sought to furnish them to the finest degree. Clive lived at 45 Berkeley Square in London from 1761 having purchased the property, together with its furnishings, from Lord Ancram for £10,500. The house has been designed by William Kent (1685-1748) in 1737 and overlooked the very fashionable square. While he was in India for the second time he wrote to his wife about the first floor state apartments at Berkeley Square, saying ‘I would have the Grand Flight of Rooms furnished in the richest and most elegant manner, a man of great taste and judgement should be consulted.’

In addition to his London residence, after his second campaign in India, Clive purchased Walcot Hall in 1763 for £90,000. Walcot originally dated to the Elizabethan period, and Clive commissioned Sir William Chambers (1723-1796) to rebuild the house after he had acquired it. After Clive’s early death in 1774, at the young age of 49. Walcot passed to his son, Edward (1754-1839). Edward married Lady Henrietta, daughter of Henry Herbert, 1st Earl of Powis, and in 1804, on the death of his brother-in-law the 2nd Earl of Powis who was without issue, the title was revived and Edward subsequently became 1st Earl of Powis, and with it came the magnificent Powis Castle.

Through his connections with the East India Company and as a result of his campaigns in India, Robert Clive inevitably filled his properties with treasures from India and the East. Around the same time that Walcot as sold in 1935, a large collection of reverse glass paintings were sold, the majority of which were subsequently acquired by the venerable dealer Blairmans for exhibition at the Grosvenor House Antiques Fair. The present two pictures, along with one other, were retained by the original purchaser in 1935 where they have remained until this year.

This was the first time that these mirror pictures had been offered for public sale.


Comparative Literature:
For a mirror picture from the Clive colleciton with the same frame:
David S. Howard, A Tale of Three Cities Canton Shanhai and Hong Kong – Three Centuries of Sino-British Trade in the Decorative Arts, p. 151, fig 194
Howard & Ayers, China for the West, pp. 640-43