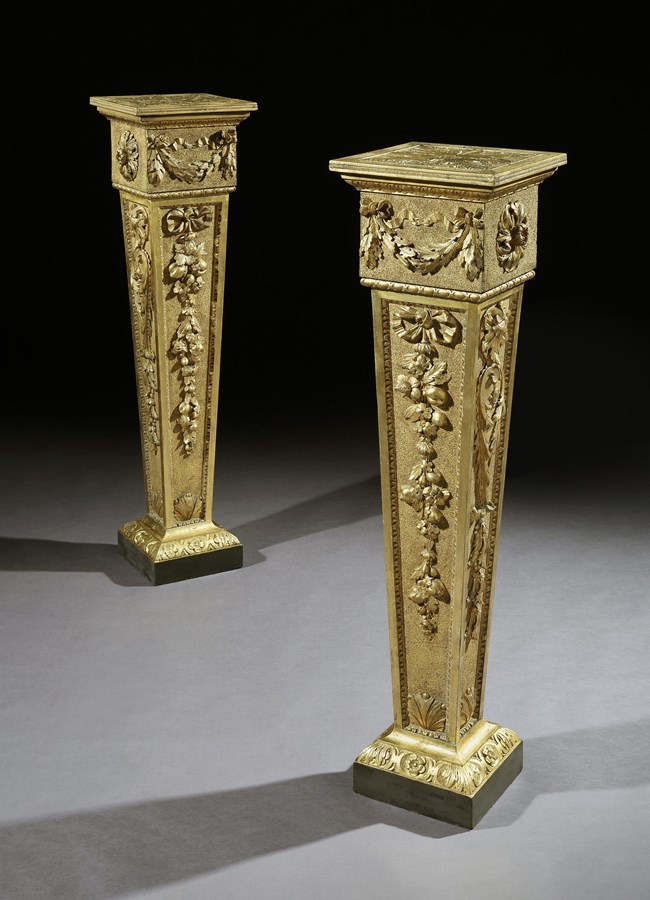 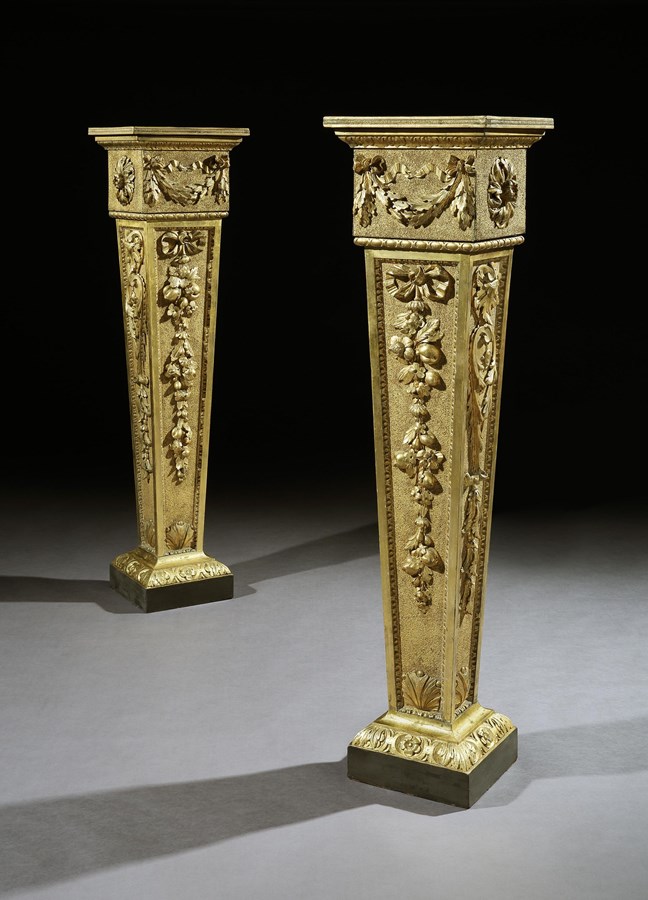 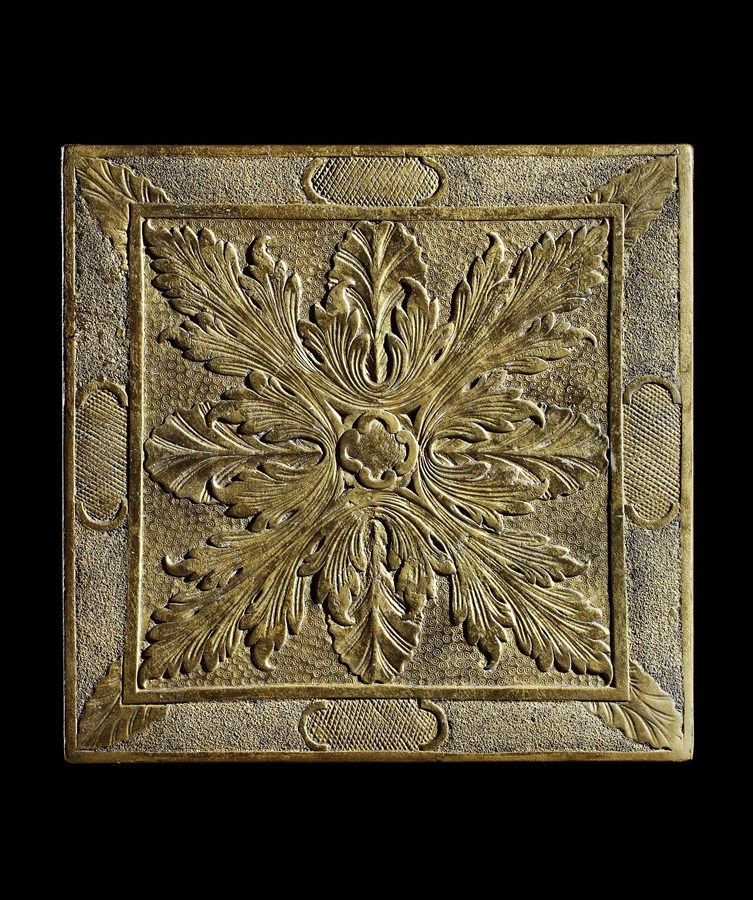 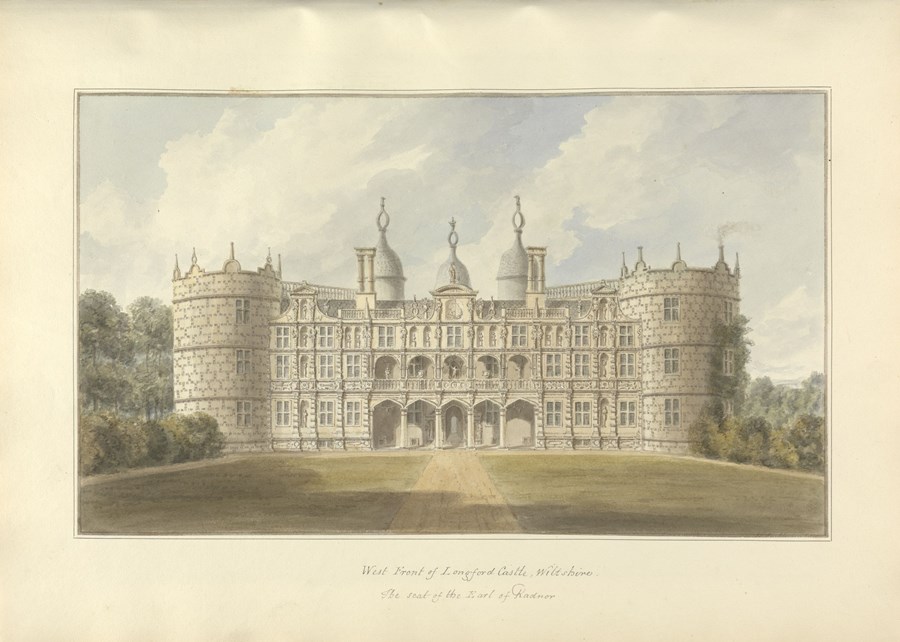 An outstanding and highly important pair of George II carved giltwood and gilt-gesso pedestals attributed to Benjamin Goodison made for Longford Castle, Wiltshire. Each square top with a gilt-gesso carved foliate spray and cartouche border above a swag-draped oak leaf frieze, the tapering pedestals with sanded panels mounted with ribbon-tied fruit and flower sprays, the sides with C-scrolls and acanthus, and standing on plinth bases.

The other four pedestals remain in the collection of the Earl of Radnor at Longford Castle, Wiltshire.

Longford Castle
Situated on the banks of the River Avon near Salisbury, Wiltshire, Longford Castle was originally built in the late 16th century for Sir Thomas Gorges (1536-1610), courtier to Queen Elizabeth I, by the architect John Thorpe (1565-1655). The structure was built in the form of a triangle with three round towers, which gave it the appearance of a feudal castle. It is possible that the three towers, which are labelled in contemporary plans of the house as Pater, Filius, and Spiritus, were meant to represent the Holy Trinity.

The castle became the residence of Sir Edward des Bouverie (1688-1736) in 1717. According to legend, Sir Edward was riding past the castle and fell in love with it, and having enough money in his saddle bags he purchased the property on the spot. The des Bouverie family was descended from a Huguenot silk weaver, Laurens des Bouverie (1536-1610), who had fled from religious persecution during the Reformation and settled in London. Sir Edward was part of the City of London merchants.

Sir Edward’s brother, Sir Jacob des Bouverie, 1st Viscount Folkestone (1694-1761), succeeded the title in 1736 and set out to alter the castle and the grounds. He created a new two-storey Palladian entrance hall around 1740, transformed the old Winter Parlour in the east tower into a library, and converted the Matted Gallery into the Picture Gallery. Sir Jacob sought the advice of several notable architects of the time, including Roger Morris, who worked at Wilton, and John Wood the Elder or John Wood the Younger, both of whom were influential in shaping the architecture of Bath throughout the eighteenth century.

In addition to the architectural work, Sir Jacob focused his efforts on the interiors. He commissioned some of the finest cabinetmakers of the time, including Benjamin Goodison, William Hallett, William Vile and John Cobb, William Bradshaw, William Ince and John Mayhew, and Thomas Chippendale. Longford has also been home over the centuries to fabulous old master paintings including works by Holbein, Claude, and Velazquez.

Benjamin Goodison
These pedestals were likely commissioned for the Picture Gallery and can be confidently attributed to Benjamin Goodison (1700-1767). Goodison is mentioned frequently in Sir Jacob’s House Book, which provides an itemized list of his household and personal expenses from 1723 and 1745. Goodison received numerous large payments for significant commissions that totaled a sum of £872.11.6 between 1737 and 1743.

The pedestals echo the motifs seen throughout the rest of the house with classical designs including acorns and oak leaves. The oak leaf motif serves as a symbol of longevity, endurance, and strength, success from humble beginnings, as well representing patriotism and Englishness. Sir Jacob was also known as a great tree-planter. A magnificent table supplied by Goodison for Longford, now in the Victoria & Albert Museum in London, is also carved with oak leaves.

Percy Macquoid described the pedestals as ‘contemporary with specimens at Houghton, but altogether superior in style.’ The remaining four pedestals can be seen today in the Picture Gallery.