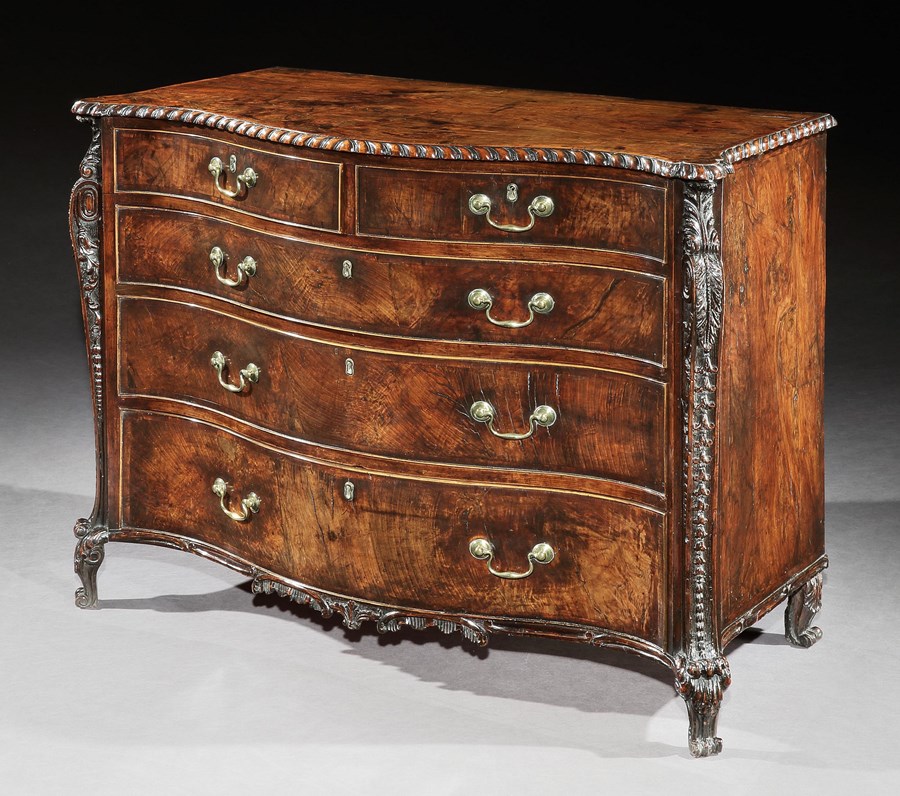 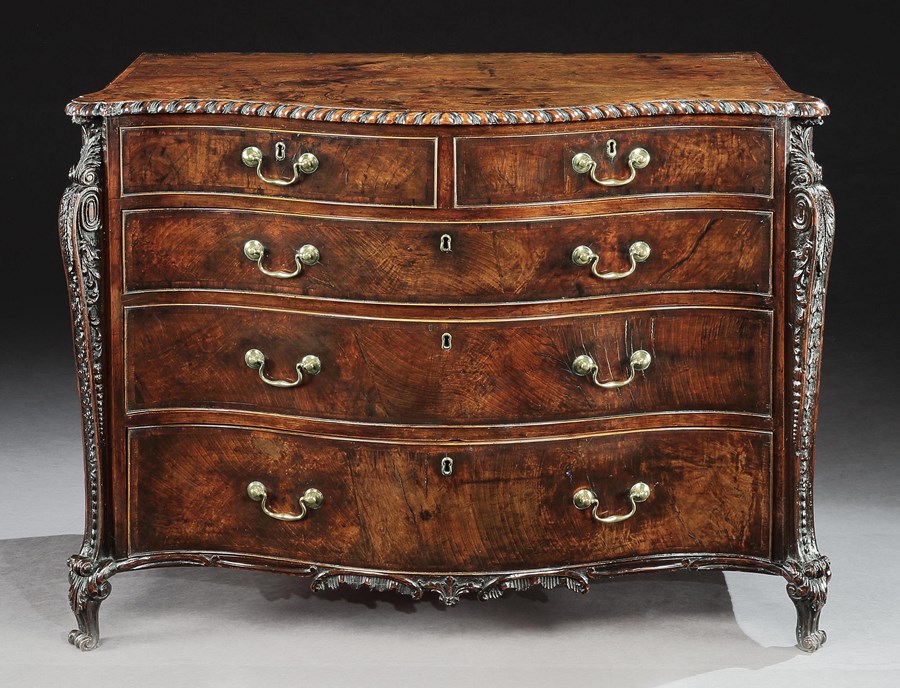 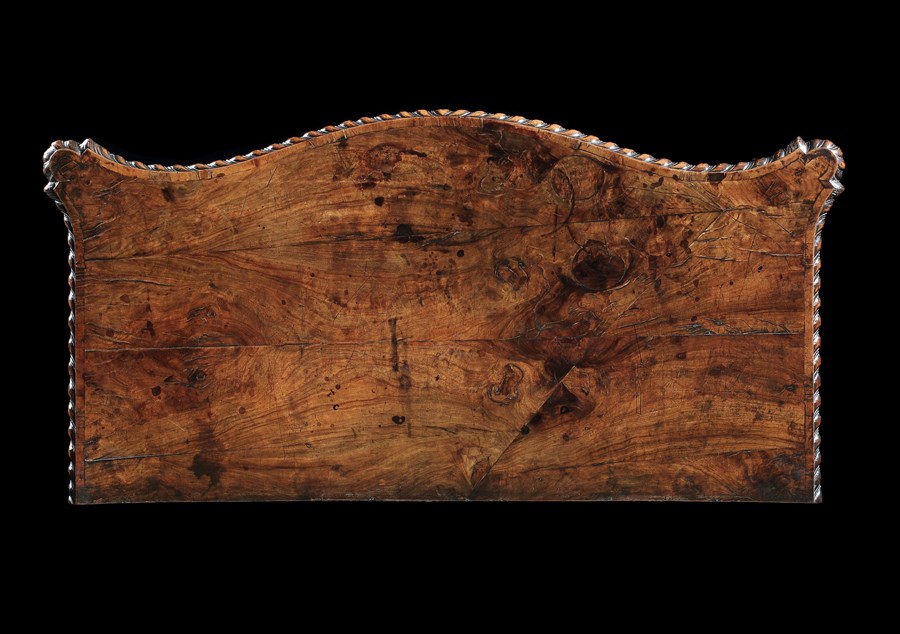 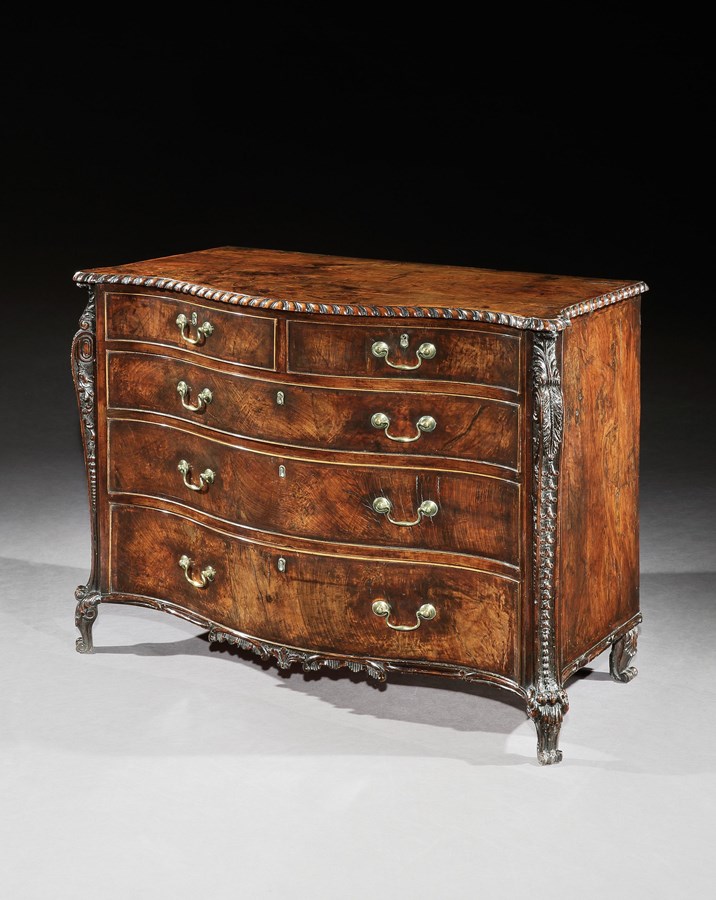 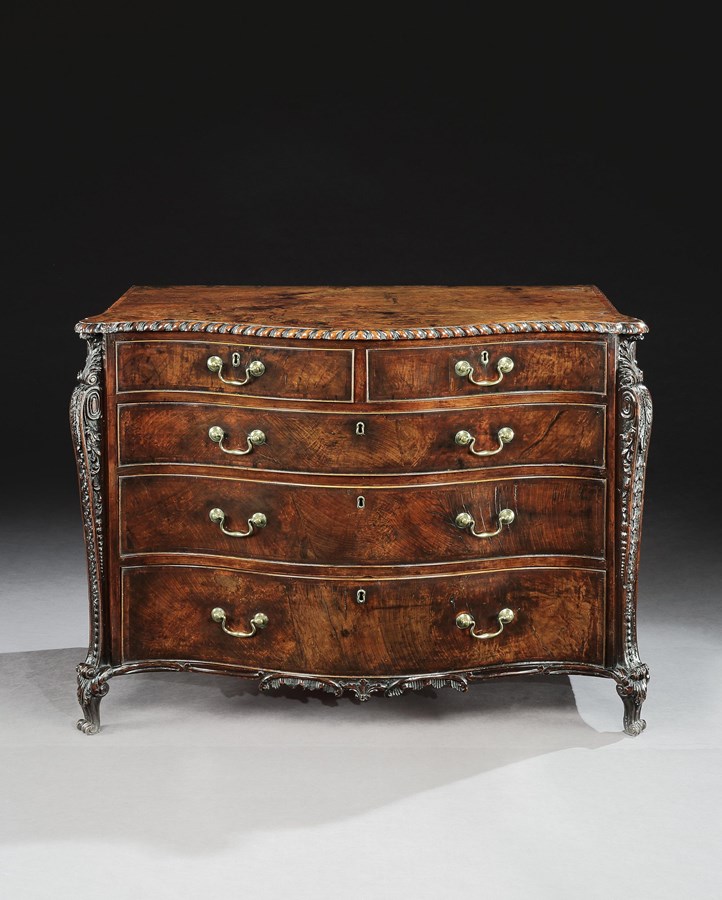 A very rare and important George III yew-wood serpentine commode attributed to William Gomm. The serpentine top with bold gadrooned edging to the front and sides, above two short drawers over three yew-wood cross-banded graduated drawers each with fine brass swan neck handles and roundel back plates, all above an elaborately carved lower frieze of elongated horizontal C-scrolls and foliate decoration which is also repeated on the sides. The canted corners similarly decorated with carving of outstanding quality, with impressive scrolls, acanthus leaves, harebells and further foliate detailing. Standing on beautiful carved short cabriole legs with scroll toes.

The yew-wood of the most exceptional colour and patination throughout.

William Gomm
Gomm was born around 1698 as the son of Richard Gomm, yeoman farmer of Chinnor in Oxfordshire. He served as an apprentice to Hugh Maskall, a leatherseller in London, starting in 1713. Gomm established his own workshop at Peterborough Court around 1725.  In the 1730s, Gomm moved his workshop to Newcastle House in Clerkenwell Close, which had been the property of the Dukes of Newcastle. This workshop was also very close to Giles Grendey’s business in Clerkenwell Square. Gomm worked in collaboration with Abraham Roentgen in the 1730s. He expanded the business in the 1760s when he took on presmises at 3 Freeman’s Ct, Cornhill.

Gomm had married Dinah Cookman in 1728 at Harefield Church, Middlesex, but she passed away in 1736. He remarried in 1737 to Marianne de Moivre at St Martin Orgars in the City. Gomm had seven children in total, three from his first marriage (Richard, William, and John) and four from his second marriages (Mary, Elizabeth, and twins Thomas and James). His son Richard joined Gomm in business in 1756 as a partner, and in 1763 the company was refashioned as William Gomm & Son & Co.
Three Gomm manuscript books survive at the Winterthur Library in Delaware, which include designs for furniture, an outline of the five orders of architecture, and geographical and mathematical exercises. Gomm’s furniture designs draw inspiration from Thomas Chippendale’s Director with the incorporation of gothic, rococo, and chinoiserie elements. The manuscripts feature desigsn for looking-glasses, a girandole, a table frame, an elbow chair, a clothes press, bookcases, a bed, a sideboard table, a library table, a cabinet on stand, and a commode. In addition to designs for individual pieces of furniture, Gomm also provided drawings depicting the furnishings for a drawing room and an ante-room, each of which is filled with seat furniture, pier glasses, tables, and window curtains.

The business had trade labels, but it appears to have been used sparingly. To date only one marked item is known: a mahogany Pembroke table on square section legs. The label on this piece features both the Newcaslte House and Freeman’s Court address and is in the name of Richard & William Gomm, so is likely from the late 1760s or early 1770s.

Gomm’s earliest known commission was to Richard Hoare of Barn Elms between 1731-33. Gomm supplied a number of pieces, including a walnut dressing glass, two mahogany armchairs, a ‘lolling’ chair, a backgammon table, a mahogany chest, two dressing tables, two ‘fine’ tables, a claw table, and a ‘fine’ mahogany tea-chest. Gomm also supplied a ‘fine Mahogany Compass Cutwork Tea Table on Castors’ and a ‘Mahogany BedChair Stuff’d & finish’d’ to Richard Weddell for his Pall Mall, London house. One of Gomm’s most prominent patrons was the 5th Lord Leigh for the furnishings of his home at Stoneleigh Park, Warwickshire, beginning in 1763. In total, Gomm supplied 183 pieces ranging from assorted chairs, a chest on chest, a Pembroke table, and several dressing commode tables, and the total for these pieces amounted to £818 9s. Many of these pieces remained at the house until 1981 when the contests were sold at a Christie’s auction on 15-16 October. 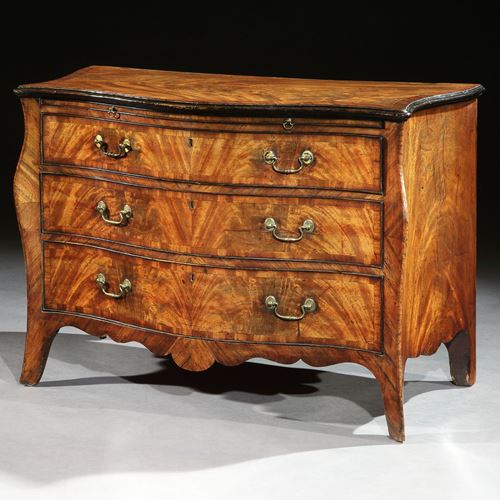 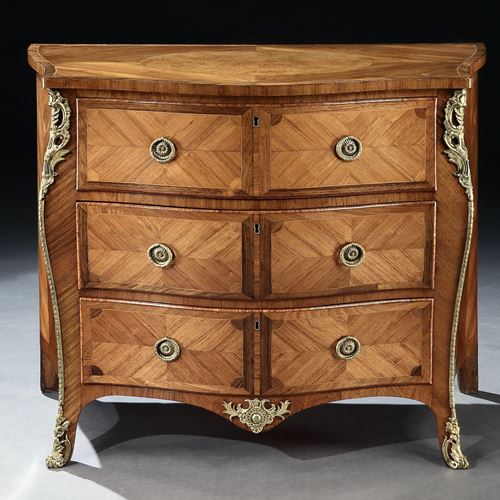 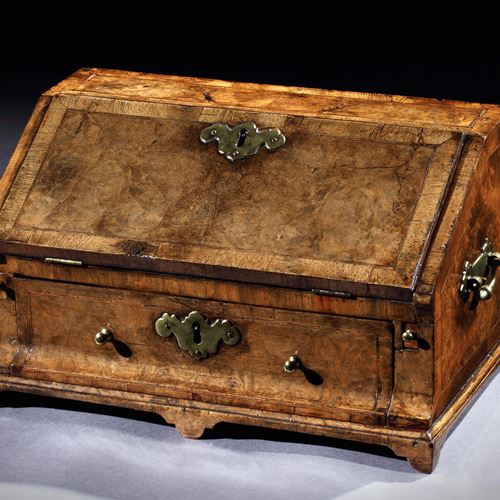