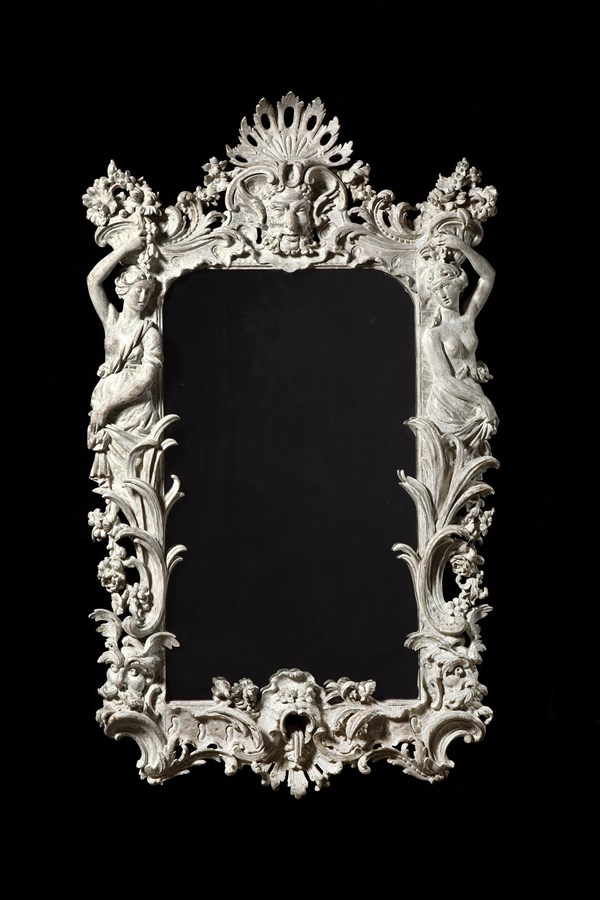 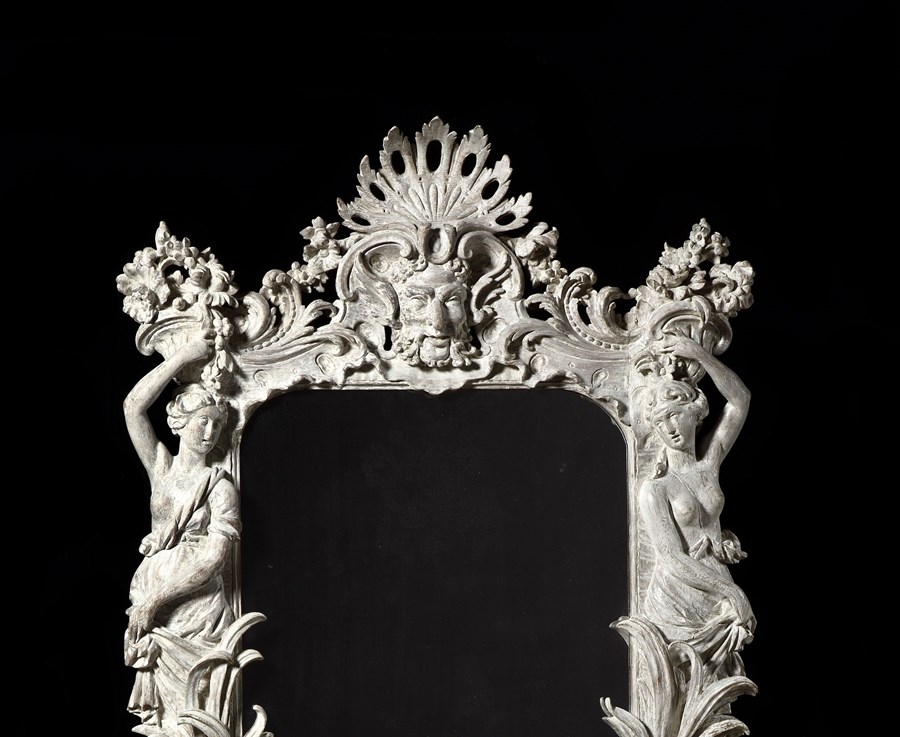 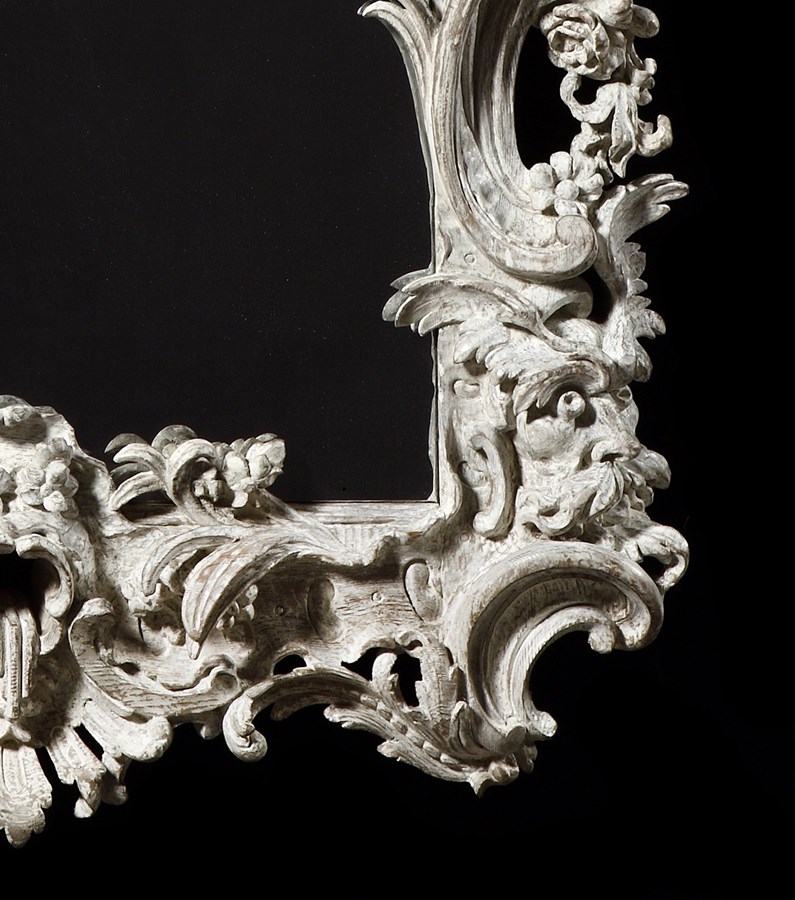 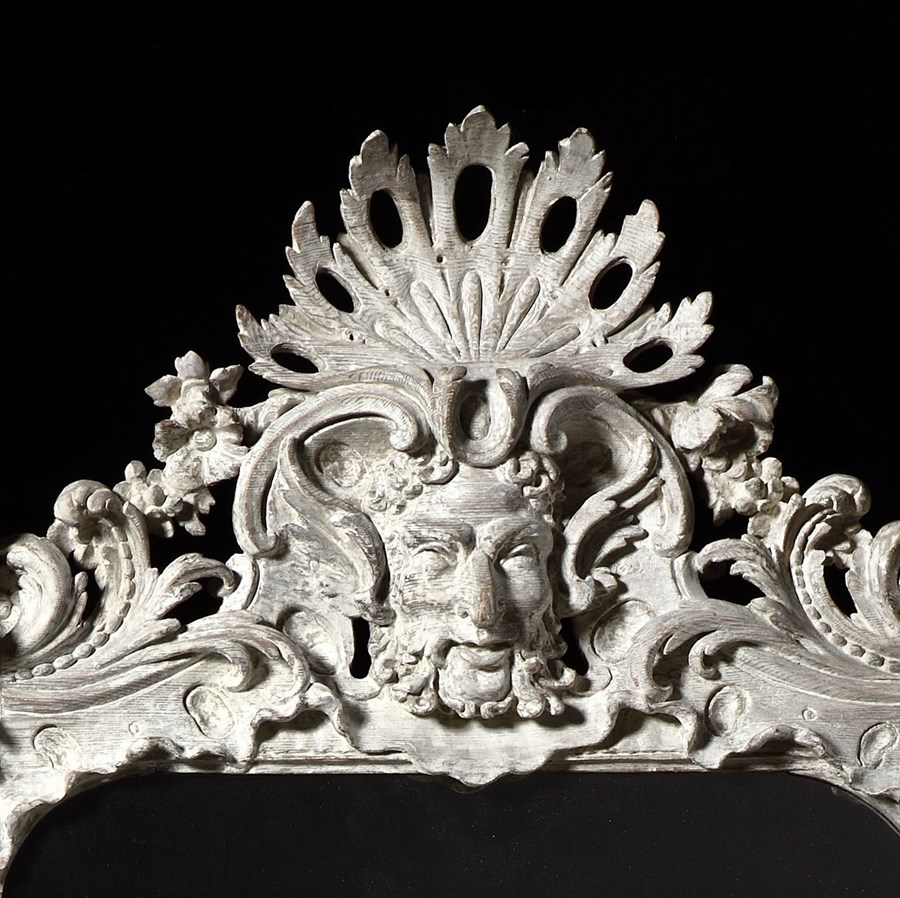 An outstanding and highly important George II carved and painted mirror in the manner of John Vardy, the architect, and his brother Thomas Vardy, a carver. The exceptional frame flanked by female terms emanating from scrolling palms above fantastical bearded masks, the top surmounted by a wonderful mask surrounded by scrolling foliage and C-scrolls, the base of the frame with a waterfall pouring from a grotto, the whole further carved with flowers and foliage.

This rare and fantastical mirror reflects the emergence of the rococo style in England, which developed in the wake of the Palladian revival earlier in the century.

The Palladian movement was characterized by the work of William Kent, a renowned English architect who looked to antiquity for inspiration. The architect and designer John Vardy began working for the Royal Office of Works in 1736 where he served under Kent. Vardy published a book of Kent’s designs in 1744 entitled Some Designs of Mr. Inigo Jones and Mr. William Kent. This publication included designs that epitomized the Palladian style with architectural renderings and designs for furniture. The satyr mask cresting on this mirror relates closely to a drawing from the publication for a table that Kent designed for Houghton Hall. A slightly later publication by Isaac Ware, another Palladian architect, entitled Designs of Inigo Jones and Others, features a design that is very similar to the female terms that flank either side of the mirror (plate 51).

Vardy achieved acclaim in his own right as an architect and designer, and one of his most notable projects was Spencer House in St. James’s. Spencer House was the residence of John, 1st Earl Spencer, who commissioned Vardy to design the facades for the house as well as the interiors and some of the furniture. The most famous room is the Palm Room, which serves as the architectural climax to the ground floor suite of rooms. The palm trees reflected the contemporary interest in classical architecture and its connection to nature. The palm motif appears prominently in this mirror with the palm fronds climbing up either side of the frame.

While Vardy’s designs incorporated Palladian principles, he was also innovative in introducing rococo themes into his design. The rococo movement came to England largely due to the rise of the St Martin’s Lane Academy, which formed in 1735 under the direction of William Hogarth. This a circle of artists and designers promoted the rococo for its association with the natural world. This mirror reflects the burgeoning rococo movement with the cascading waterfall from a grotto at the base of the mirror along with the dramatic C-scrolls found throughout, some emanating from the aforementioned palm fronds. The two bearded masks on either side of the mirror also reflect rococo designs with their playful expressions and facial hair that morphs into wings.

While the design can be attributed to John Vardy, it is likely that his brother, Thomas Vardy, was responsible for the carving of the mirror. Thomas worked as a carver in London who joined the Livery of the Joiners’ Company in 1753. He worked at Cobham Hall, Kent and for Lord Hillsborough house near Westerham, Kent (now called Valence). It is believed that the brothers collaborated together on frames using John’s designs and Thomas’s carving skills. This mirror is an elegant example of the intersection of the Palladian and rococo and is made more interesting by the possibility of the collaboration of two craftsmen who were influential in Georgian design.