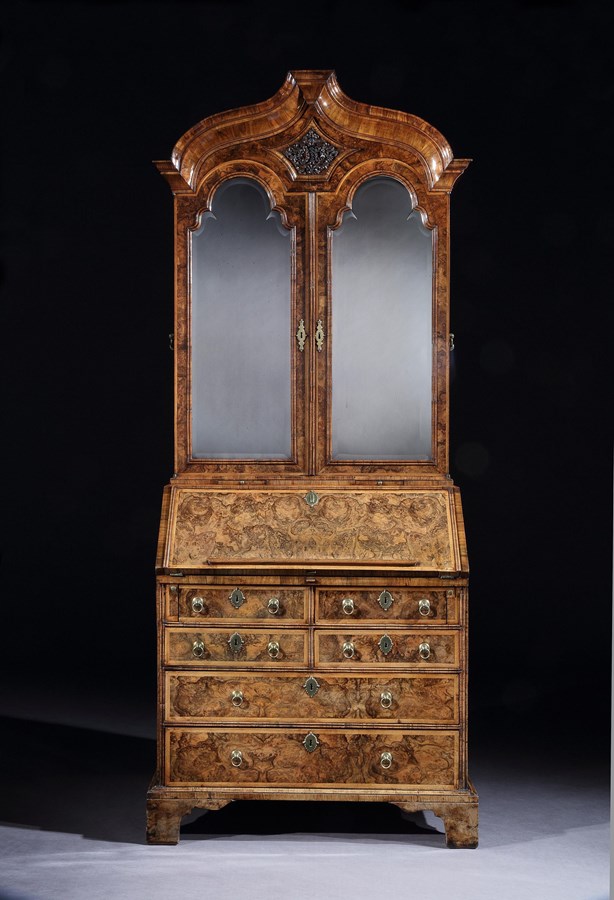 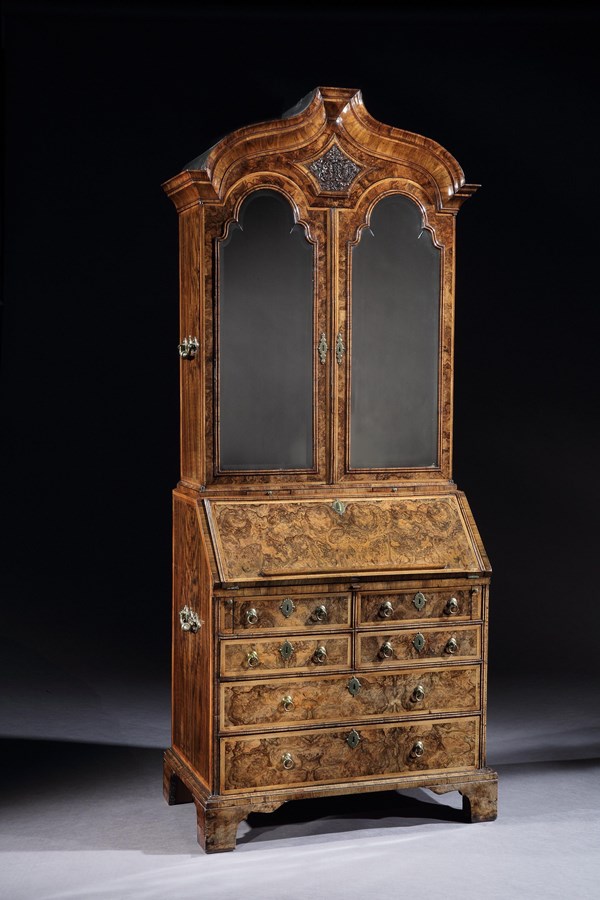 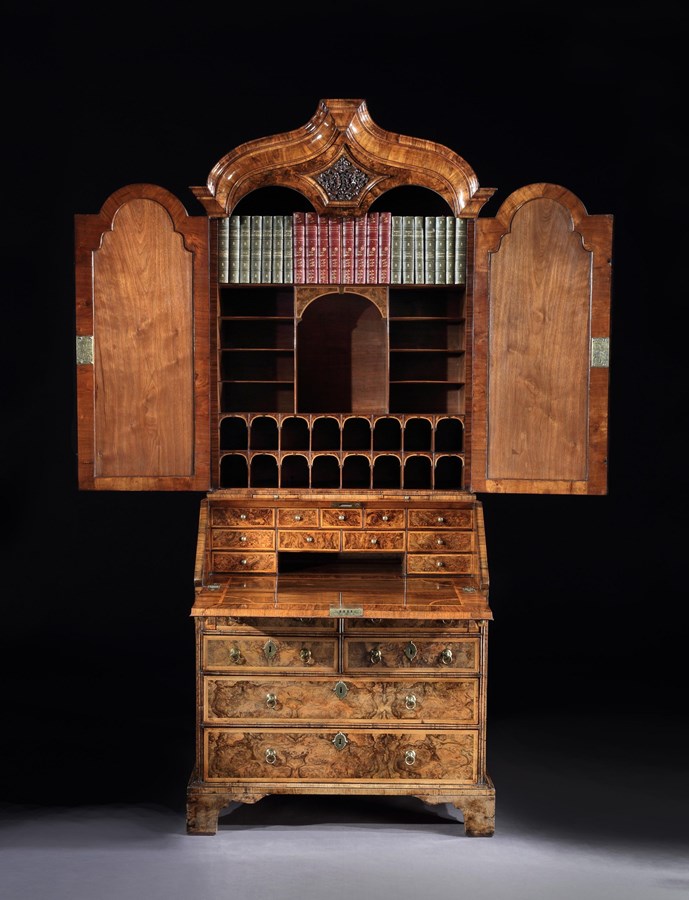 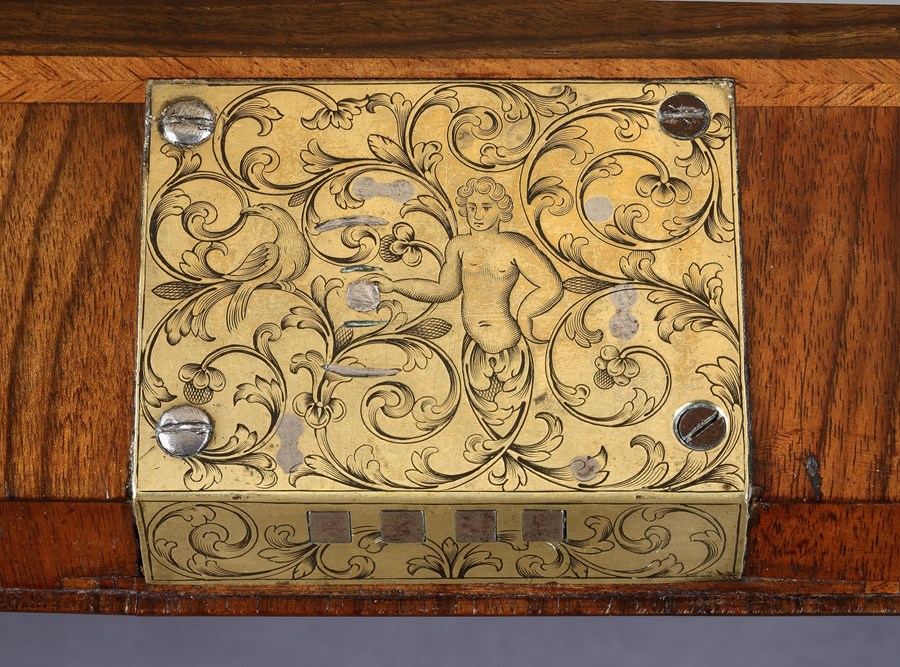 An exceptional and highly important George I burr walnut cabinet. The bureau, veneered throughout in the finest walnut of outstanding colour, crossbanded and featherbanded throughout. The upper section with serpentine cresting and cavetto cornice enclosing a shaped inset cartouche with carved interlaced C-scrolls, above a pair of arched mirrored doors enclosing a fitted interior of pigeon-holes and shelves all beautifully detailed with inlay. The bureau section enclosing a fitted interior of drawers and a crossbanded and featherbanded walnut writing flat of exceptional colour, above four short and two long drawers all similarly veneered, on shaped bracket feet. With magnificent engraved locks, brass pulls and superb bold carrying handles to both sections.

This bureau cabinet with its triumphal-arched and ogival-scrolled temple pediment is designed in the George I ‘Roman’ manner, which was popularised by the architect James Gibbs in his publication Book of Architecture (1728). A drawing of a similar bureau cabinet with the same shaped pediment was sketched by a Russian craftsman who had been sent by Czar Peter the Great to train in London with cabinetmakers. It is possible that these Russian craftsmen trained with Peter Miller, a cabinetmaker based on the Strand who is known to have supplied a walnut bureau cabinet of this type for export to Spain. The interior of this cabinet along with several other related examples are richly fitted with pigeon-holes and drawers around a tabernacle compartment.

The fall of the bureau is fitted with an elaborate burnished and engraved brass lock-plate table that is designed in the Louis XIV ‘Roman’ style. The figure emerges from scrolling Roman acanthus and relates to designs by Jean Le Pautre in his publication Rinceaux de different feuilliages (1660). Thomas Bowles, an English designer, popularised this style in England in the early 18th century with his publication A New Book of Ornaments Proper for Gravers, Jewellers, carves and most sorts of Artificers.

There is a pair of closely related cabinets fitted with similar engraved brass locks decorated entirely in gilt gesso and of the same overall form. This pair is one of two pairs of cabinets traditionally attributed to the Royal cabinetmaker James Moore, who worked in partnership with the glass manufacturer John Gumley on the Strand. Please refer to the superlative gilt gesso cabinet in the Notable Sales section of our website.

A further walnut cabinet attributed to Peter Miller from the collection of Sir Thomas Beevor, Bt., is also related to this small group. 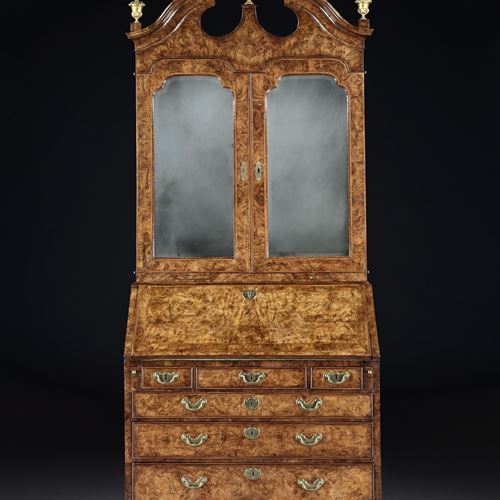 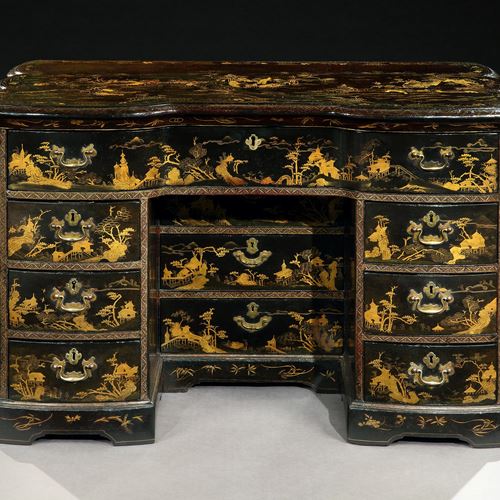 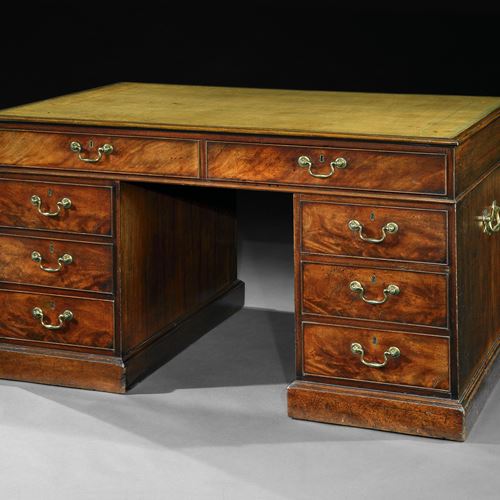