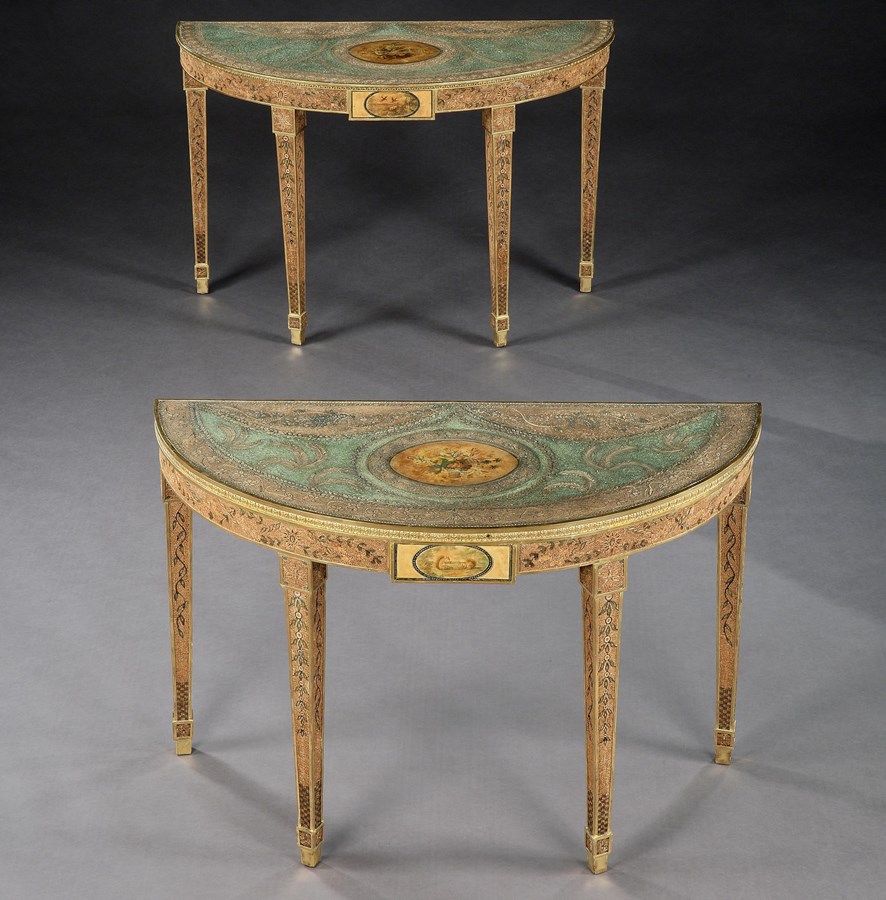 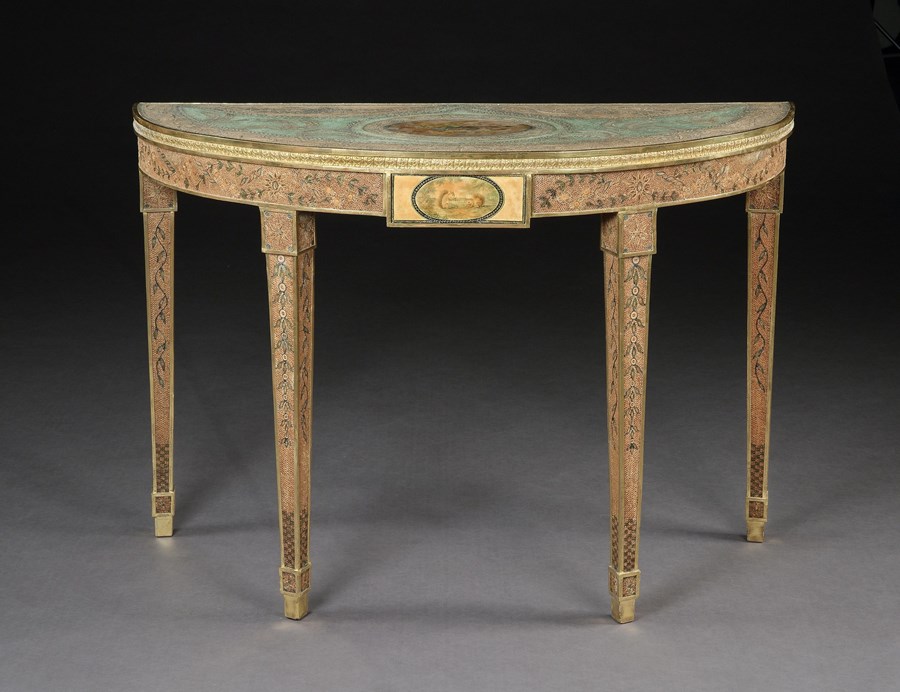 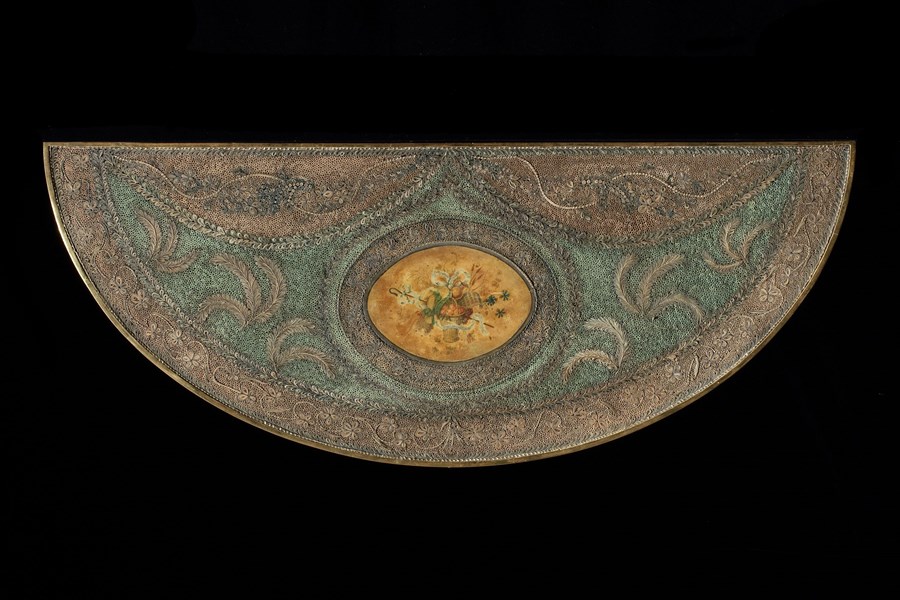 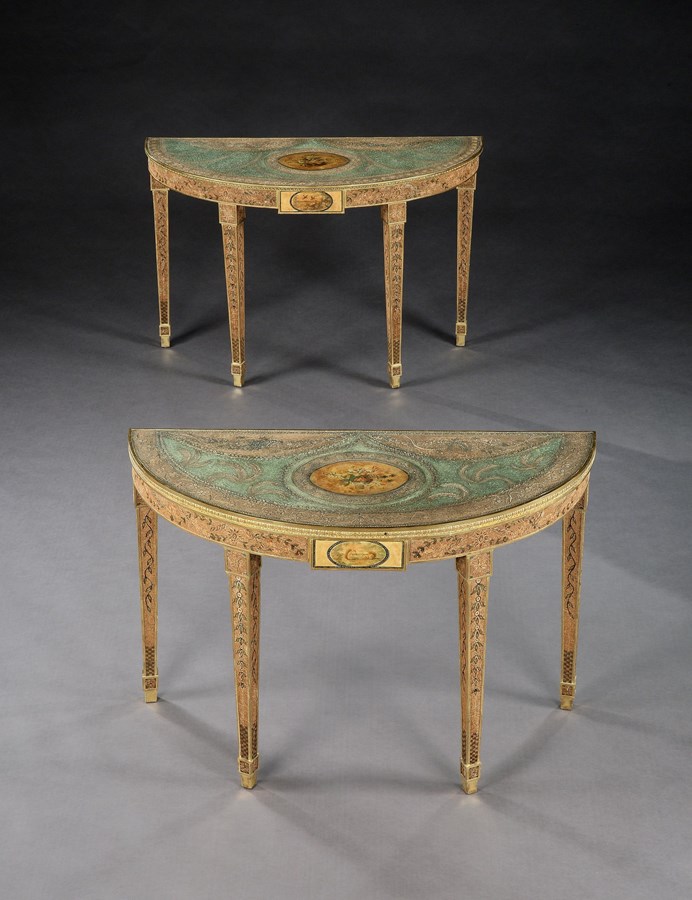 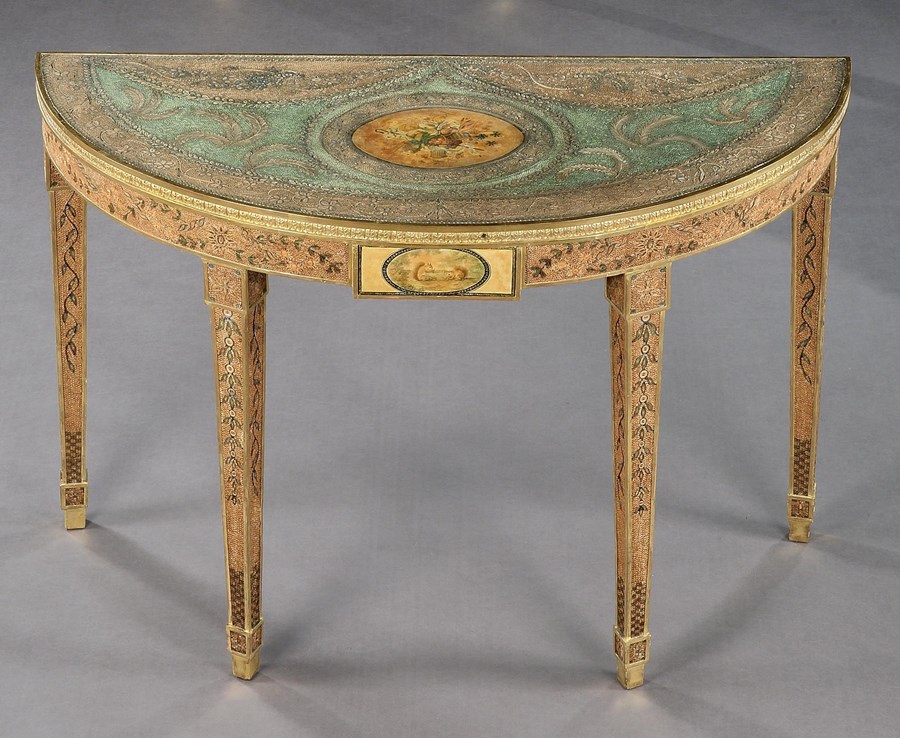 An extraordinary and incredibly rare pair of George III scroll paper tables. The demi-lune tops each with oval painted medallions to the centre, with similar tables to the central frieze, the painted panels depicting a basket of fruit, a musical trophy, birds with chicks in a nest, and a pair of squirrels. The remainder of the tops, the frieze, and the facets to the legs profusely decorated in coloured scrolled paperwork formations of swags and flowers, with giltwood highlights to the frieze and legs, each terminating in gilded spade feet. Minor variations.

Scrolled Paper: A History
Scroll paper work has had a variety of names over the years: paper filigree, paper lace, and quilling all refer to the decorative style achieved by rolling up ribbon-like strips of paper into small coils and gilding or colouring the paper to create a polychrome effect. The finished surface takes on a honeycomb like appearance.

The art form derives inspiration from the traditional practice of metal filigree work in 15th century Italy and Austria. The technique was highly prized and spread to Asia where the technique was enthusiastically practiced by local craftsmen.

Filigree work became popular in England towards the end of the 17th century. When Charles II (r.1660-85) married Catherine of Braganza in 1662, she brought a dowry that included a number of precious objects from India, including impressive metal filigree caskets and jewellery made with silver and silver gilt filigree.

The diarist Samuel Pepys refers to the art form in 1683 when he notes on 14 May, ‘This day we received a baskett from my sister Pall, made by her of paper, which hath a great deal of labour in it for country innocent work.’ The fashion for this decorative style grew steadily in the 18th century and remained popular throughout the Georgian period.

A Ladies Craft
The paper scroll decorative technique was often carried out by ladies as a hobby that was considered both refined and artistic. The New Ladies’ Magazine published an account of paper filigree work including patterns for floral motifs and borders.

The patterns in the above illustration can be identified on the present pair of tables in various interpretations. These designs make use of the wide range of techniques to fold and scroll the papers to make complex and elaborate floral decoration.
The craft was described as being ideally suited for refined women, as ‘the art affords an amusement to the female mind, capable of the most pleasing and extensive variety; it may be readily acquired and pursued at a very trifling expense.’

In Jane Austen’s Sense and Sensibility, Elinor Dashwood assists Annamaria Middleton in creating a paper filigree basket. Elinor notes, ‘I may be of some use to Miss Lucy Steele, in rolling her papers for her... I should like the work exceedingly.’

A Royal Pastime
Princess Elizabeth, daughter of George III, is believed to have made a pole screen covered with scroll paper work with floral still life decoration for her physician, Dr. Alexander Fothergill. Along with her four sisters, Elizabeth received tuition in a range of artistic skills, including drawing, lithography, and silhouette portraiture.

Princess Elizabeth’s interest in scroll paper work was mentioned in an article published in 1785 promoting the art form. The article, written originally in French by Mr. Styart, notes in the subtitle that paper filigree-work is ‘at present one of the most polite amusements of young ladies of fashion, and even of the Royal offspring.’

In 1791, Charles Elliott (1752-1832) the cabinet maker and upholder of Shepard Street who held the role of 'Royal Upholsterer and Cabinetmaker,’ supplied Princess Elizabeth, with a box prepared for decorating with filigree work. The box was fitted with ebony moldings, lock and key, and featured a lining. Elliott also supplied the Princess with fifteen ounces of different filigree papers and an ounce of gold paper.

The Market for Scroll Paper
There is evidence of a small yet thriving market to support the craft of paper filigree work. As mentioned on the previous page, the cabinetmaker Charles Elliot supplied materials for scroll paper work to Princess Elizabeth in 1791.

Shops offered instruction guides on the technique and accompanying materials, including papers in a rainbow of hues. The stationer and printer William Heath of Well Court, Queen Street Cheapside advertised that it sold ‘Filagree in Colours, Plain/... in Colours, Gilt/ … White do. …. Card do. / Frosting of different fine Colours, for Filigree work.’
Cabinetmakers in turn created picture frames, boxes, and mirrors fitted with recesses for the paperwork. S & J Fuller at the Temple of Fancy, 34/35 Rathbone Place supplied such frames and boxes to be filled with ‘fancy work,’ which included scroll paper designs.

Rudolph Ackermann’s Repository of Arts at 101 The Strand was renowned for its impressive collection of all sorts of artists materials, including ‘various coloured and fancy papers.’

Comparisons
Although scroll paper decoration was mostly confined to smaller pieces, such as tea caddies or picture frames, there are a few exceptional pieces of furniture decorated with this delicate technique, including this rare pair of tables.

There is a scroll paper cabinet on stand at the Lady Lever Art Gallery, Port Sunlight, Cheshire. In addition to the scroll paper work, the cabinet is fitted with painted panels and freshwater pearls.

The Victoria & Albert Museum have a cabinet stand with architectural pediment (W.14:1-1973). Like the present pair of tables, the museum cabinet features square tapered legs with similar vine decoration alternating with trailing harebells terminating in a checkered pattern toward the block feet.

There is a small cabinet on a table stand with scroll paper decoration that came from Pelling Place, Old Windsor, Berkshire, now in a private collection.

This decorative style was the subject of an exhibition, ‘Rolled, Scrolled, Crimped, and Folded: The Lost Art of Filigree Paperwork,’ at the Florian Papp Gallery in New York in 1988. 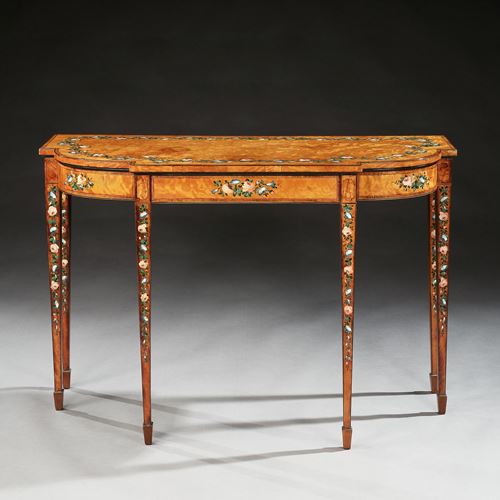 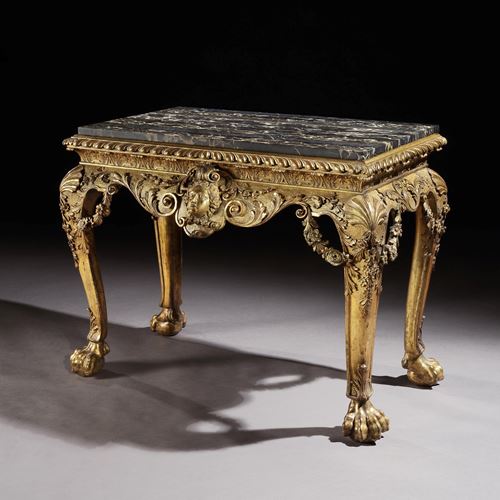 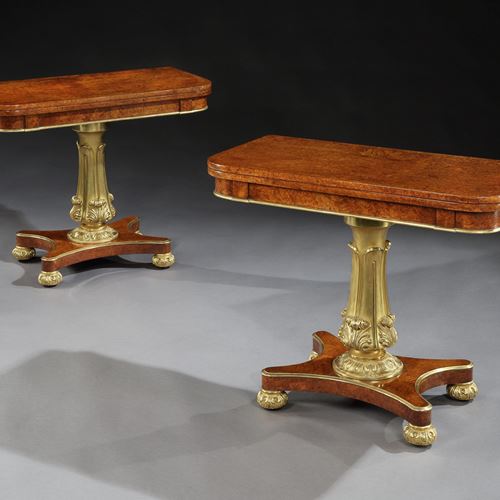 A PAIR OF AMBOYNA CARD TABLES