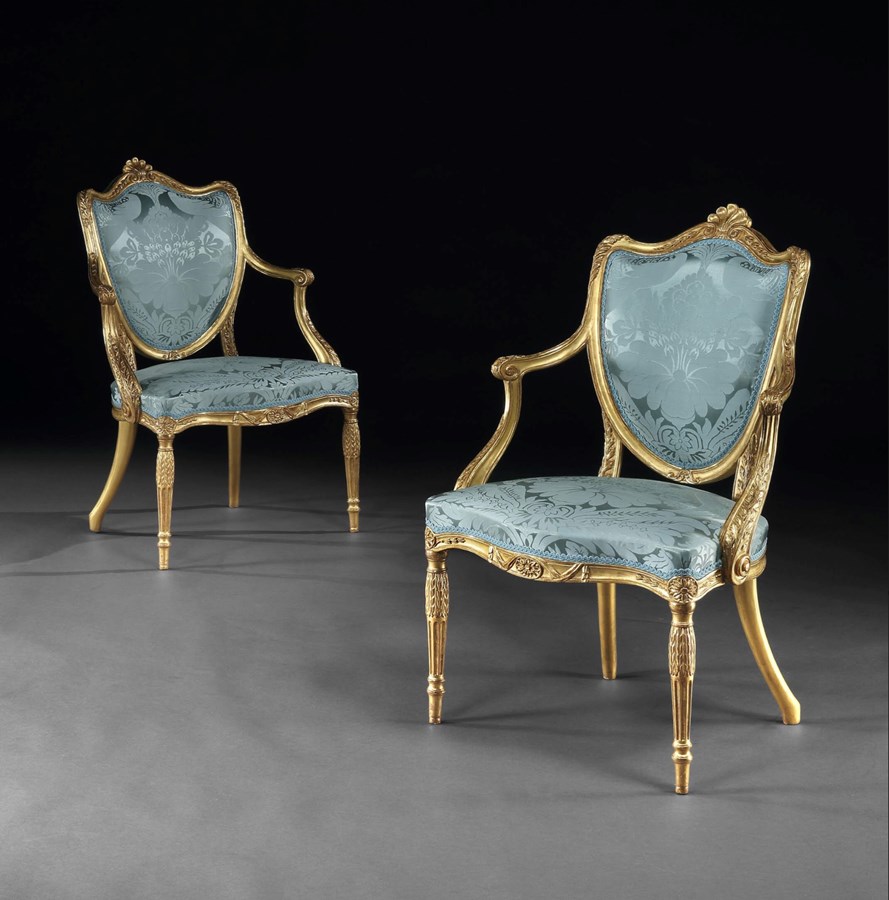 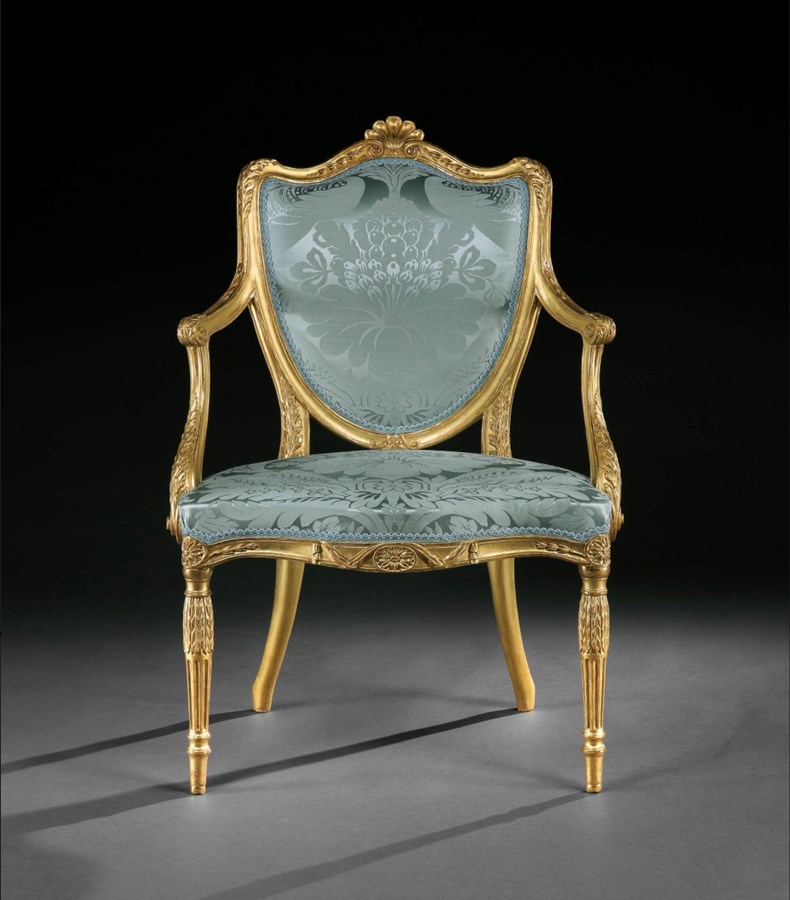 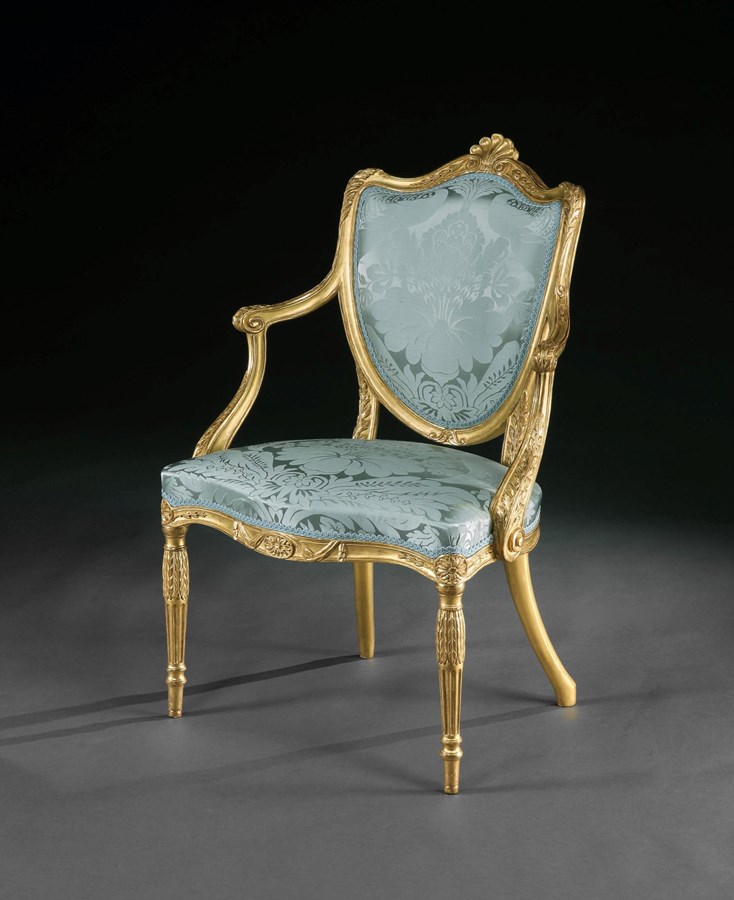 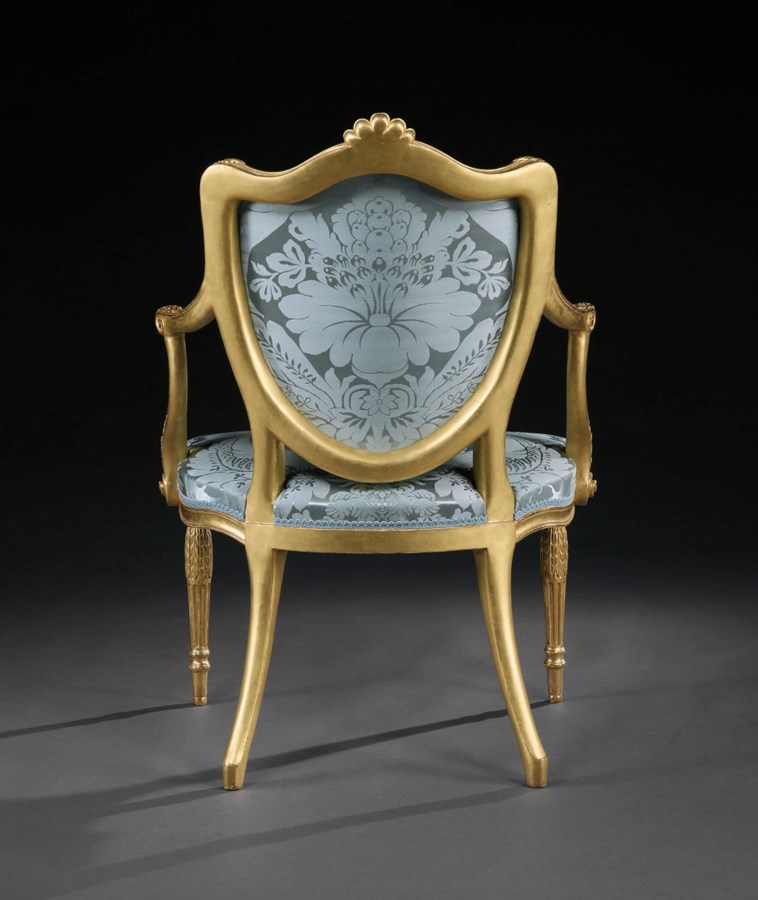 A PAIR OF GILTWOOD ARMCHAIRS

Attributed to Ince and Mayhew.

A superb pair  of George III giltwood open armchairs, each with shield shaped channelled back centred by a fluted scallop-shell flanked by husk-trails and with acanthus-carved shoulders, the padded back and seat upholstered with silk damask, with scrolled acanthus arms and channelled supports, the serpentine-fronted seat rail with central floral patera with stylised classical drapery and rounded corners, on turned, tapering stiff-leaf-headed fluted legs.

These armchairs with their sophisticated French neo-classical ornament are similar to designs by the architect James Wyatt and the work of Mayhew and Ince as well as François Hervé. The overall profile and carving is nearly identical to a suite of eight armchairs (probably original twelve) which Mayhew and Ince supplied to James Alexander, 1st Earl of Caledon, for the Oval Drawing Room at Caledon House, Ireland (illustrated, Hugh Roberts, ‘Unequil d’Elegance’: Mayhew and Ince’s Furniture for James Alexander, 1st Earl of Caledon’, Furniture History, vol. XLV, 2009, p. 105, fig. 2). The Caledon chairs have a similar shaped back centred by a stylised shell, the serpentine apron is centred by an identical draped patera and the legs are nearly identical as well. The Caledon chairs may originally have been painted.

The carving of the seat rail and legs of the chairs is identical to that of a pair of window seats inscribed 5715 Hornby which were sold at Christie’s New York, 8 April 2004, lot 275 ($89,625) retaining remnants of apparently original paintwork.

It is interesting to note that the overall profile of this chair is very similar to designs for chairs by James Wyatt, circa 1780, and illustrated in John Cornforth and John Fowler, English Decoration in the 18th Century, London, 1974, p. 29, fig. 13

A PAIR OF GILTWOOD ARMCHAIRS