An important and extremely rare Queen Anne period pier mirror, with three bevelled plates in an arched frame with a verre eglomisé  border in red and gilt decorated with leafy strapwork, in a simple moulded gilt wood frame carved with a repeating pattern of foliage and formalised scrollwork.

The term verre églomisé derives from the name of the 18th century Parisian dealer, framer and restorer Jean-Baptiste Glomy (1711-1786). The technique involves applying gold or silver leaf the reverse of a glass plate into which designs are then engraved with subsequent applications of coloured foils and pigments providing the background colour. Reds or blacks were popular colours, and shades of blue and green were also used but rarer.  The technique existed in ancient Rome – and enjoyed a revival in France and Europe during the reign of Louis XIV. Eglomisé border glasses were often engraved with figural and arabesque motifs in the manner of Jean Bérain (1640 – 1711) and Daniel Marot  (1661 – 1752) and certainly the arrival of Marot in England in 1694 would have likely promoted this stunning decorative technique there.

An interesting historical note refers to ‘A large old fashioned Glass Sconce, in a Glass Frame, with Gold Flowers painted on the Glass Frame, and a Green Ground’ was stolen in 1727 from the Long Acre premises of Benjamin Goodison. Goodison’s former ‘Master’ James Moore (d. 1726), in partnership with John Gumley had provided mirrors for the Royal residences from 1707.  In 1707, the Pelletier brothers, René and Thomas (active c. 1680 -1720) are recorded supplying a pair of églomisé overmantel mirrors to Ralph, 1st Duke of Montagu for Ditton House, Buckinghamshire. Sometimes of massive proportions, other examples were supplied to Penshurst Place, Hatfield House, Kedleston Hall and Chatsworth – and others can now be viewed in Victoria & Albert Museum, London and the Metropolitan Museum, New York. 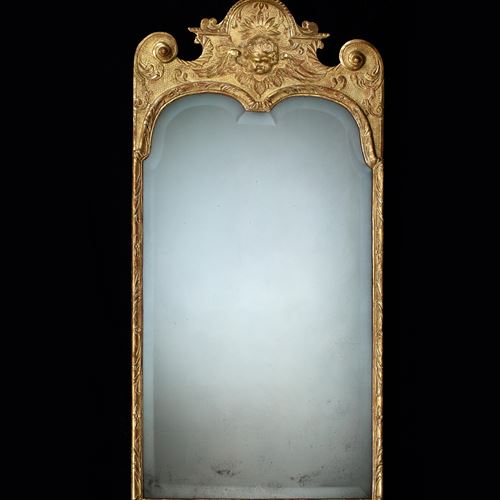 A GEORGE I GILT GESSO MIRROR 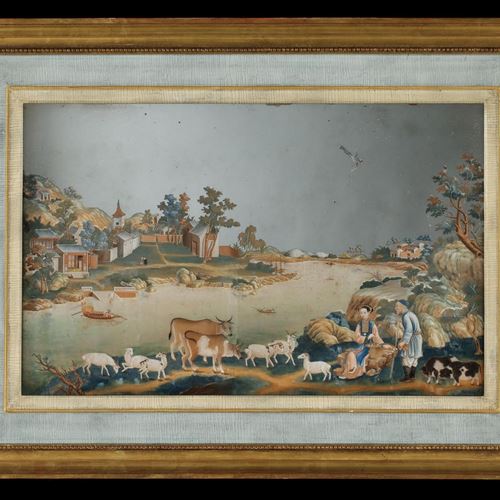 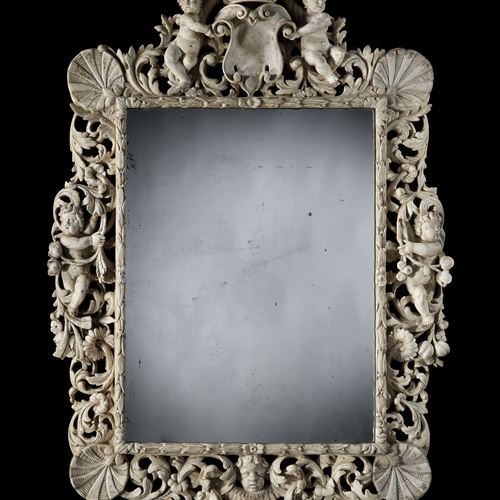